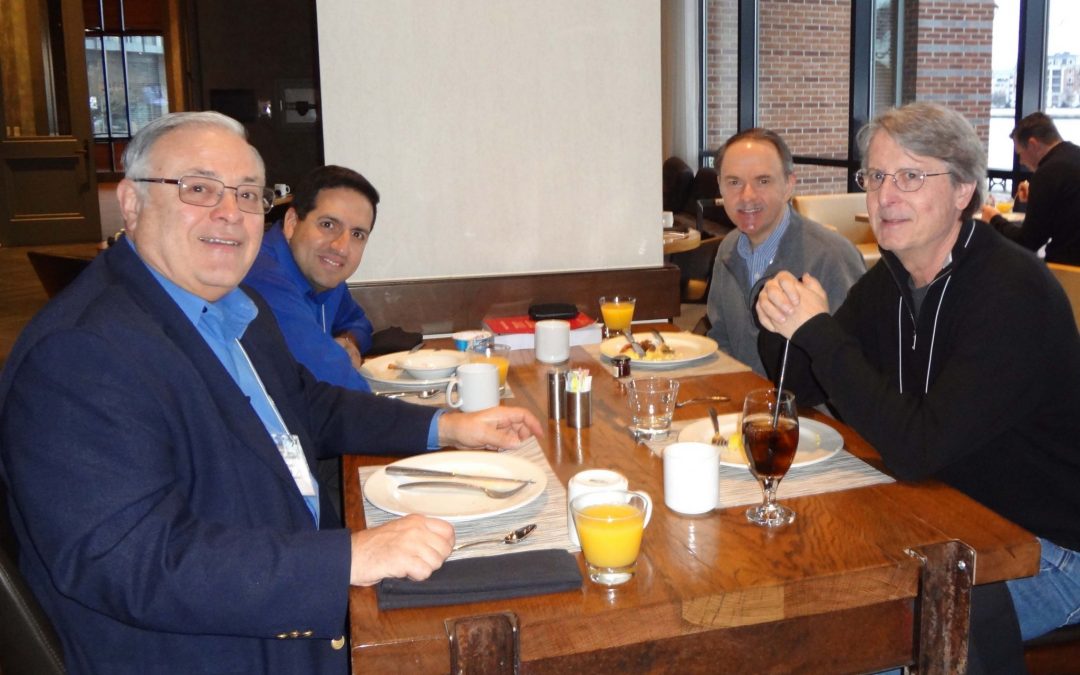 Hyperacusis Research was excited to participate in the Association for Research in Otolaryngology’s Midwinter Meeting for the fifth consecutive year. The conference, which took place in Baltimore, MD, in February 2017, brought together more than a thousand of the world’s top otolaryngology researchers. Bryan Pollard, President of Hyperacusis Research, met with many researchers and other partners, and led the special dinner event on “The Next Steps for Hyperacusis.” 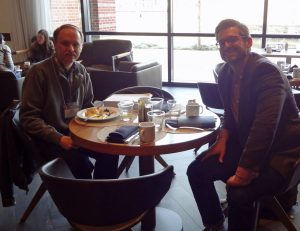 Bryan met with Jonathon Whitten from Decibel Therapeutics decibeltx.com. Decibel Therapeutics is pioneering a comprehensive approach to define the underlying biological causes of various hearing disorders and is developing a pipeline of breakthrough therapies. As an audiologist, Jonathon’s interest in hyperacusis is in finding the best assessment method.  Loudness Discomfort Level (LDL) has been a standard assessment of hyperacusis for decades. LDLs less than 90dB is often used as a standard limit for hyperacusis determination (a patient with a 90dB LDL would be very mild compared to many we know with LDL’s of 60dB or lower).  However, there are some critical concerns with LDL testing including significant variability in the way the test is administered and, more importantly, significant risk of worsening a patient’s condition.

Another assessment method sometimes used is Categorical Loudness Scaling. Categorical Loudness Scaling determines the level at each frequency that corresponds to a range of loudness categories using an adaptive procedure (Brand & Hohmann, An adaptive procedure for categorical loudness scaling, 2002).  The loudness judgments are used to calculate the loudness growth functions. At each level, the listener assigns a loudness category (using terms such as soft, medium, loud, etc.) incrementing in 5 dB steps.  The listener does not need to go up to a level that is considered uncomfortable.  Hyperacusis Research would support an evaluation of this method, which should put the patient at less risk than with LDL testing.  Ideally, a test could be developed  to make an objective measurement (such as imaging) for the diagnosis of hyperacusis.

Deborah Hall, NIHR Nottingham Hearing Biomedical Research Unit, and Christian Sumner, MRC Institute of Hearing Research, University of Nottingham, provided Bryan with several important insights into what it will take to advance the science related to hyperacusis.  Deborah shared her experiences with the British Tinnitus Association in the development of James Lind Alliance for tinnitus.  The alliance provides a systematic process driven by patients, family members and clinical professionals. It makes research recommendations that are publicly accessible.  A key aspect of the Alliance’s work is the development a top 10 list of the important unanswered research questions.  Hyperacusis Research is using some of these concepts in the development of a Hyperacusis Alliance.

Deborah has also been involved in the development of hyperacusis assessment tools and showed an interest in partnering in survey work such as our Sanford CoRDS in-depth hyperacusis survey.

Chris discussed his interest in the research associated with Type II pain fibers, which appear to play a key role in hyperacusis with pain.  Chris indicated that testing certain drugs that are currently used for neuropathic pain and other health conditions may impact Type II fibers.  This type of targeted drug research takes significant effort, but would be well worth it since it could offer a path for temporary relief for hyperacusis sufferers. 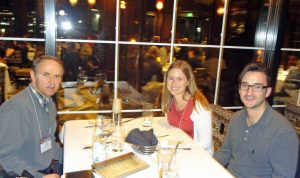 Matthew Richardson and Katie Turner work in Professor Fan Gang Zeng’s lab at the University of California Irvine (Professor Zeng is one of Hyperacusis Research’s Scientific Advisors).  Katie provided a few highlights of her poster at ARO titled “Suprathreshold Processing Deficits in Listeners with Hyperacusis.”  Katie initially assessed those with a complaint of hyperacusis by the Khalfa Hyperacusis questionnaire.  Next, she obtained physiological measures (otoacoustic emissions and auditory brainstem responses) along with speech recognition in noise to assess perceptual deficits related to hyperacusis. Listeners with hyperacusis appeared to have higher speech recognition thresholds in noise, particularly when the signal and masker were both male talkers.  The preliminary results suggest that hyperacusis has a perpetual consequence in impaired suprathreshold processing.  Therefore it is harder for hyperacusis sufferers to understand speech in a noisy environment.   Bryan also discussed with Matthew and Katie the shortcomings of the Khalfa questionnaire, which is a primary assessment tool for research with hyperacusis sufferers. 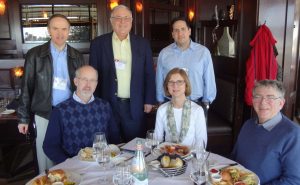 Board member Michael Maholchic, along with his wife Betsy, and Iver Juster, MD, joined Bryan in meeting with Tom Lobl and Freddie Daver from The Alfred E. Mann Institute (AME) for Biomedical Engineering at the University of Southern California.  Tom and Freddie are interested in learning more about the challenges of hyperacusis sufferer’s lives.  Michael, Betsy and Iver all shared the details of their family members affected by hyperacusis, including approaches they take to mitigate the noise that causes setbacks.  Additionally, we explored the issue of lingering pain from new noise exposures.  Hyperacusis Research is glad to see AME’s interest in learning more about hyperacusis to determine possible new approaches to managing life with noise-induced pain.

Tom Lobl and Bryan Pollard met with Charlie Liberman, Professor of Otolaryngology, Harvard Medical School, to discuss hyperacusis with pain (see picture at top of article). At the 2016 ARO symposium on Auditory Nociception and Pain Hyperacusis, Charlie explained how Type II dysfunction may underlie hyperacusis with pain, while differences in the Type I pathway may underlie differences in loudness discomfort.  Bryan and Tom sought to understand what types of drugs could be of value if the Type II fibers are proven to play a dominant role in hyperacusis with pain.  The most common drugs taken, with some seeing a minor benefit, are benzodiazepines.  More work is needed to refine this potential etiology to determine a pharmacological path for relieving suffering after new noise exposures. 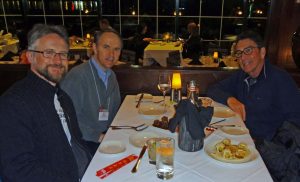 Steve Barad joined Bryan Pollard in an in-depth discussion with Martin Pienkowski from Salus University.  At ARO. Martin presented a poster titled “Can Prolonged, Non-traumatic Noise Exposure Cause Tinnitus?”  While most animal models of tinnitus involve the use of loud noise exposure (typically well above 100dB), Martin tested the use of prolonged noise exposure at more moderate noise levels.  Martin exposed animals to 70 dB for 8 weeks.  Gap inhibition of the acoustic startle reflex was used to assess tinnitus. Martin did not find these animals developed tinnitus.  However, this work represents a concept important to both tinnitus and hyperacusis.  Hyperacusis Research is interested in uncovering what types of damage can result from more moderate noise levels (e.g. 70dB), since this level of noise can be very impactful to those who already have tinnitus or hyperacusis.

Bryan and Martin also discussed a paper from the July 1995 edition of the ENT Journal titled: “Cochlear Nerve Section for Intractable Tinnitus.”  In this paper, Dr. Jack Pulec, who died in 2003, describes his work, spanning several decades, with severe tinnitus patients who also had significant vertigo or hearing loss.  Out of 151 cases, complete relief of tinnitus occurred in 101 patients and improvement was obtained in 43 patients by severing the cochlear nerve.  While no one with tinnitus would want to lose their hearing (and obviously no one would endorse it), the work is of interest from a mechanism point of view.  It is unclear from current brain centered etiologies of tinnitus how these patients found relief by severing the cochlear nerve.  Several other published papers demonstrate the opposite result, but with far fewer patients. 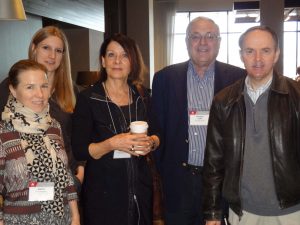 Bryan joined Freddie Daver and Tom Lobl from USC in a brief meeting with Marlies Knipper, Katrin Reimann, and Dorit Moehrle from the Tübingen Hearing Research Centre in Germany. http://thrc.hno.medizin.uni-tuebingen.de/home   Marlie’s lab has produced some critical works on hyperacusis with an emphasis on exploring both central and peripheral components in animal models.

At this year’s ARO, Dorit Moehrle presented a talk on “Hyperacusis and Tinnitus Development over Age and the Influence of Noise Exposure in the Rat Behavioral Model.”  Dorit explored how the reduced sensory function of the cochlea and changes of central activity patterns in the auditory pathway through noise-induced or age-related hearing loss (NIHL or ARHL) is involved in the development of Tinnitus or Hyperacusis. An animal model was utilized to determine auditory changes (such as hearing thresholds and outer hair cell function). Cochlear sections were analyzed for the hair cell molecular phenotype (the observable properties of an organism that are produced by the interaction of the genotype and the environment). Behavioral measurements of hyperacusis and tinnitus, before and after auditory overstimulation, were correlated to changes in peripheral and central hearing function.

The results suggest that the development of tinnitus and/or hyperacusis involves a failure to adapt the central responsiveness and an insufficient compensation of the reduced cochlear output after auditory overstimulation. 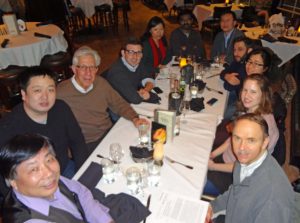 Bryan joined an evening out with many of the University at Buffalo team who attended ARO (ten in all). The team, led by Rich Salvi (a Scientific Advisor to Hyperacusis Research), is leading the way in hyperacusis research activity in the U.S.  Several key works were presented at our ARO Hyperacusis Dinner event (see separate summary).  Bryan learned about other types of challenges researchers often face, such as the work required to obtain grants for funding.  Many researchers are fully dependant on obtaining funding each year to continue their work.  The process of submitting the paperwork and follow-up for grants can be significant.  The need for grant money further underscores the importance of Hyperacusis Research’s fundraising efforts.

One researcher from Buffalo Bryan spoke with at ARO was Bo Hu.  Findings reported in his recent paper, “Dynamic activation of basilar membrane macrophages in response to chronic sensory cell degeneration in aging mouse cochleae,” may have relevance to the investigation of one factor in hyperacusis.  In this work, the research suggests that the macrophage-mediated immune response is an integral part of the cochlear response to age-related chronic sensory cell degeneration. The study reveals a major difference between macrophage responses provoked by acute and by chronic cochlear pathogeneses.  With acute sensory cell damage induced by ototoxicity, immune challenge or acoustic injury, a large number of monocytes from circulation infiltrate into the cochlea. The infiltrated macrophages are the major executor for the immune activities, including inflammatory molecule production.  Typically this damage leads to hair cell degeneration and further hearing loss.

Hyperacusis sufferers have various perceptions upon new noise exposures such as aural fullness, burning and throbbing sensations that are difficult to explain by neural effects alone.  Hyperacusis Research is interested in animal model work that could determine if any similar (yet unique) immune or inflammatory responses play a role in hyperacusis.   A key consideration is that any abnormal immune response in hyperacusis does not typically lead  to further hearing loss.