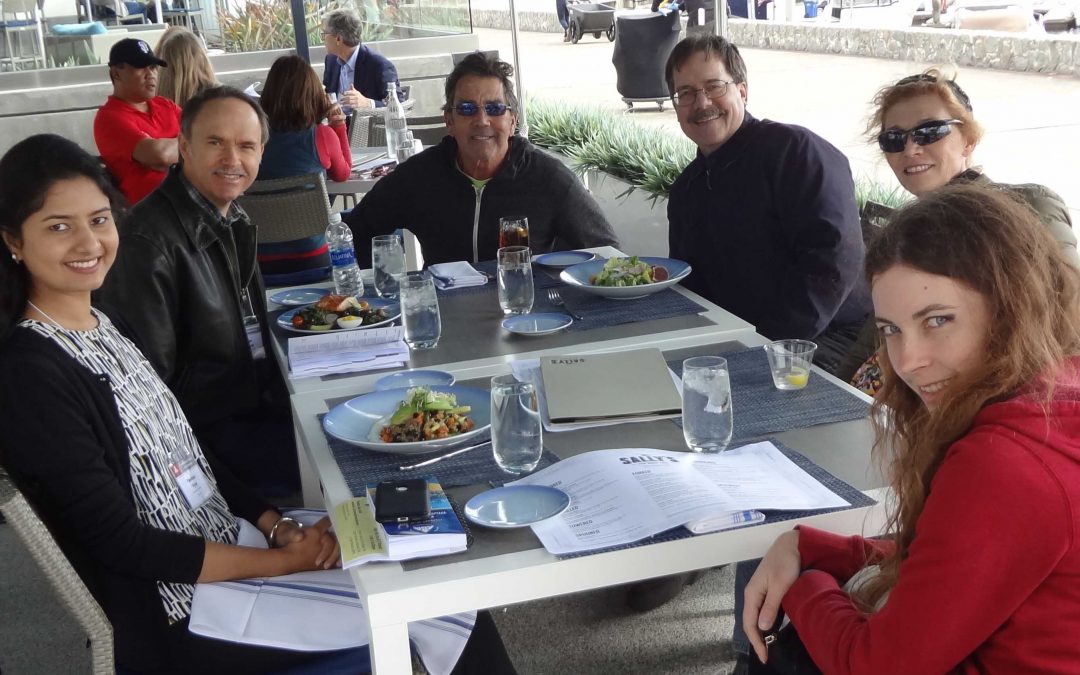 At Hyperacusis Research, fostering collaboration is a part of our DNA. We continued to expand our collaborations with researchers at the 2018 ARO meeting.  Beyond on Alliance Dinner (described in detail here), we met with many researchers and partnering organizations for more in-depth discussions to help determine the best paths to find a cure for hyperacusis.  We are grateful that the number of the leading ear researchers with hyperacusis-related efforts has continue to grow.

Bryan Pollard, President of Hyperacusis Research, met with Paul Fuchs, Ph.D. and Pankhuri Vyas, Ph.D. from Johns Hopkins University. Steve and Beverly Barad, whose son is affected with hyperacusis, along with Kirsty joined in the discussion. Paul has been a leading researcher providing the evidence to show that Type II nerve fibers in the cochlea work as pain fibers when exposed to very loud sounds.  Previously, the inner ear was considered to be void of a pain sensation mechanism.  This finding has opened the door to exploring the link between Type II nerve fibers and pain hyperacusis. A key gap is how these fibers might be activated with much lower sound levels for hyperacusis sufferers.

The group discussed how immune responses can also activate pain fibers and the possible role of the inflammatory system’s response in a damaged organ. These concepts need to be explored in a more in-depth manner.  If a mechanism could be proven in an animal model, then targeted pharmacological treatments could be developed.

At ARO, Pankhuri presented a poster titled: “Characterization of Transgenic Mouse Models for Labeling Type I and Type II Afferent Neurons.’’ The poster described the work to find specific genetic markers for Type I and Type II fibers, which is critical for studies of synaptogenesis and development of sensory innervation in the cochlea. 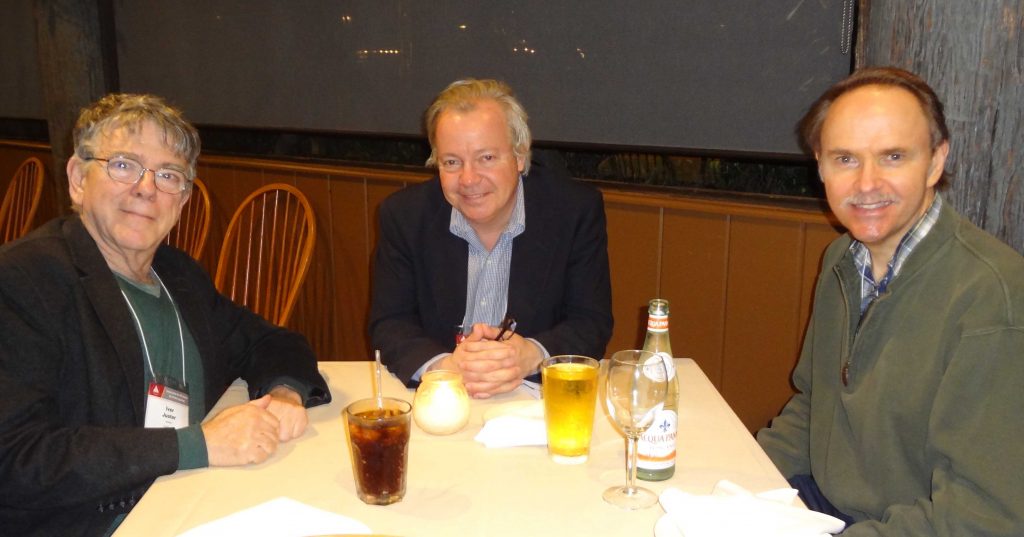 Iver Juster, M.D. joined Bryan in meeting with Jaime García-Añoveros, Ph.D. from Northwestern University. Jaime’s background in pain research has enhanced his investigation of hyperacusis with pain, which he termed noxacusis.  One interesting idea is to study neuropathic pain groups (e.g. trigeminal neuralgia or neuropathy) to see who may have hyperacusis.  It would be beneficial to know if hyperacusis occurs more frequently among those who suffer from other systematic pain syndromes.  For another effort, neuropathic pain drugs could be evaluated in animal models of hyperacusis.  We also need to get a stronger presence in the pain research community by presenting papers on hyperacusis at research conferences on pain such as the International Association for the Study of Pain.  If you have a comorbid neuropathic pain condition, we would be interested in hearing from you about how your treatment for that conditions impacts your hyperacusis. 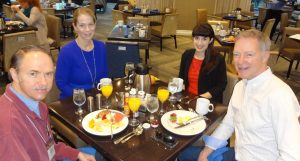 The Hearing Health Foundation (HHF) has been a vital partner with Hyperacusis Research for many years. At ARO, Bryan met with several key leaders from HHF:  Nadine Dehgan, CEO, John Dillard, board member and Lauren McGrath, Marketing Manager.  We discussed the Emerging Research Grants, which have been a vital mechanism for Hyperacusis Research to fund seed grants critical to gathering initial findings for larger NIH grants. Hyperacusis Research has funded six Emerging Research Grants.  HHF is the largest non-profit funder of hearing research in the U.S. and a leader in driving new innovations and treatments for people with hearing disorders. 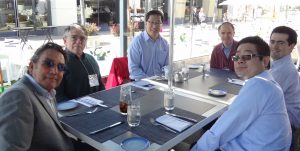 From Wayne State University, Jinsheng Zhang, Ph.D., Ed Pace and Hao Luo joined Steve Barad, Iver Juster and Bryan Pollard to discuss their work related to tinnitus. Professor Zhang was Chair of the Scientific Advisory Committee of the American Tinnitus Association during the time Bryan served on the Board of Directors for ATA.

Professor Zhang’s lab has focused on neural mechanisms of noise- and blast-induced tinnitus, hearing loss, and related traumatic brain injury (TBI). He has investigated the impact of cochlear electrical stimulation (CES) to tinnitus suppression by novel thin-film-based cochlear implants designed specifically for tinnitus rather than for hearing loss.  We hope a similar idea can be explored to asses CES’s impact on hyperacusis. 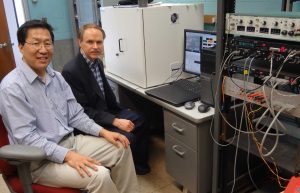 Professor Zhang is investigating pharmacological treatments for tinnitus.  He also organized a special issue of a research journal on tinnitus, with contributions from experts around the world. This issue appears in the journal Frontiers in Neurology.  In 2017, Bryan was able to visit Jinsheng’s lab at Wayne State and see the testing equipment and interpretative software used in investigating the impact of auditory damage. Read more about the Laboratory of Tinnitus and Auditory Neuroscience Research here.  Jinsheng’s team is looking to expand their work to include hyperacusis.  We look forward to seeing another expert lab join in the work to find a cure for hyperacusis.

The University at Buffalo (UB), under the leadership of Distinguished Professor Rich Salvi, has demonstrated a strong commitment to uncovering the mechanism of hyperacusis essential to finding a cure. Bryan was joined by Iver Juster and Steve Barad with five UB researchers: Senthilvelan Manohar, Ph.D. Kelly Radziwon, Ph.D. Guang-Di Chen, Ph.D. Celia Zhang and Ben Auerbach, Ph.D.   Edward Lobarinas, Ph.D. who graduated from UB, and is now at the University at Texas, also joined the discussion. 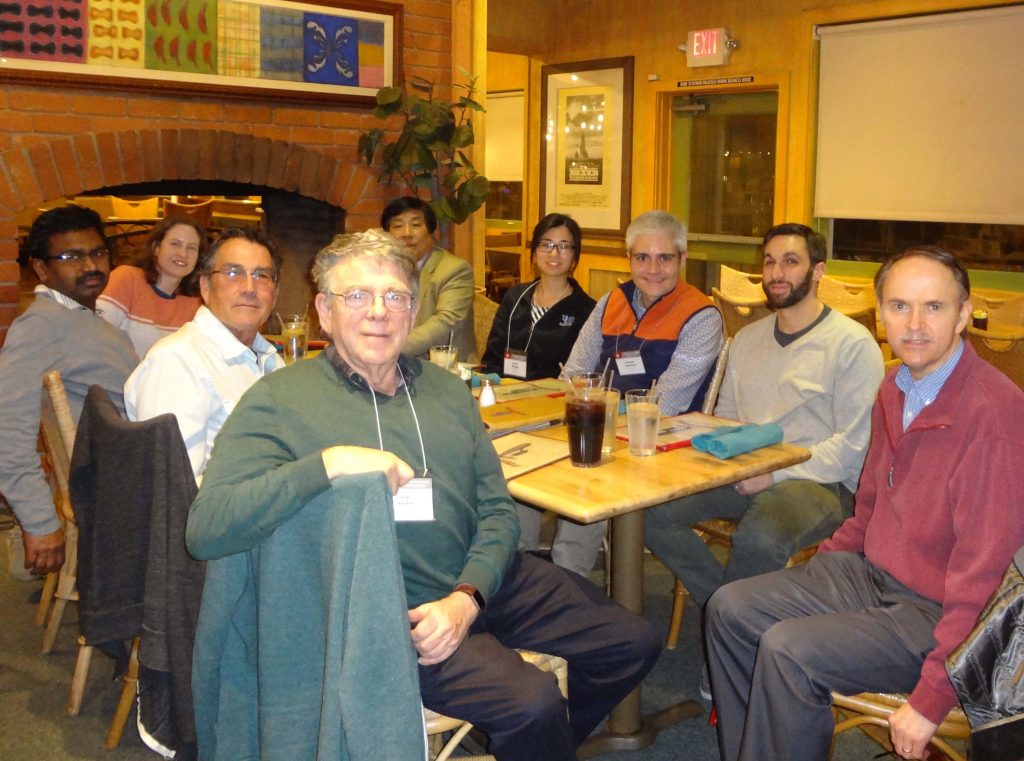 Bryan started the discussion with a vital question for many sufferers: “What can be done to mitigate pain from additional noise exposures?” The UB team is well equipped to pursue realistic options for this challenging issue.  Kelly has led the way in developing approaches to model loudness hyperacusis in rodents.  Recently, Senthilvelan expanded this model to include a model of pain hyperacusis in what is called an Auditory Nociception Test (ANT).  With this model, assessments can be made to understand what conditions create hyperacusis with pain, and more importantly, what approaches can help reduce the pain.  A starting point for investigation is testing pharmacological approaches used for conditions like neuropathy.  Our Sanford Hyperacusis Survey has shown a small percentage patients find some relief from benzodiazepines.

On the path to a cure, a question that often arises “Do genetics play a role in susceptibility to hyperacusis?” This is asked because so many are exposed to similar noise levels and relatively few get hyperacusis.  Ben Auerbach is investigating sensory hypersensitivity in those with Fragile X Syndrome (FX), which is a leading monogenic cause of autism.  By utilizing the Auditory Nociception Test (ANT) in FX animals, Ben is working to correlate the known genetic differences for FX to uncover what exact structures lead to the hypersensitivity.  If found, this may hold clues that relate to others who develop sound sensitivity. 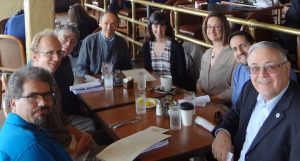 A discussion on clinical hyperacusis measurement and assessment tools was a key with a group that included University of Southern California researchers Tom Lobl, Freddie Daver and Ray Goldsworth. Sarah Theodoroff, Ph.D. of the VA National Center for Rehabilitative Auditory Research, Tanisha Hammill of the DOD Hearing Center of Excellence (HCE), and Iver Juster also participated in this discussion.

The clinical challenges with hyperacusis begin with assessment tools and how hyperacusis is defined. Tom Lobl had investigated this when pursuing a project at USC related to hyperacusis.  Sarah Theodoroff is evaluating a new method for assessing hyperacusis, which if successful, will be more accurate and safer for patients than Loudness Discomfort Level (LDL) testing.  Sarah’s work with the VA connects well with Tanisha Hammill’s efforts at the HCE, which is also focused on military populations.  While it is known that military personal are at high risk for hyperacusis due their extremely loud environments, the prevalence of hyperacusis within military populations has been difficult to study due to lack of coding the condition when other more obvious conditions like traumatic brain injury and hearing loss.  A special effort is underway to uncover the prevalence with a deeper analysis of a subset of the military data.  This should enable a starting estimate, which can lead to an increase in DOD funding. 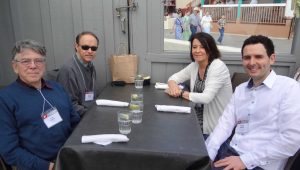 Marlies Knipper, Ph.D. and Philipp Eckert, Ph.D. of Tuebingen in Germany, joined Iver Juster and Bryan Pollard to discuss their recent work on tinnitus and hyperacusis. Marlies’ talk at ARO was on “Characteristic molecular and functional biomarkers for tinnitus in humans.”  She presented preclinical  studies to understand  functional and molecular biomarkers in hearing-impaired human subjects with and without tinnitus. Using a combination of investigations from biomarkers in body fluids such as cortisol levels, from audiometry fine structure analysis and fMRI in patient and control groups, Marlies found characteristic features for the tinnitus group.  Marlies indicated some of the differences may also exist for hyperacusis sufferers.  We look forward to seeing additional outcomes of this work, which may offer fresh insights into why certain populations are at more risk for tinnitus and hyperacusis.

Bryan also met with Martin Pienkowski, Ph.D. of Salus University to discuss his works related to cochlear synaptopathy and its potential impact on hyperacusis. In a paper titled: “Prolonged Exposure of CBA/Ca Mice to Moderately Loud Noise Can Cause Cochlear Synaptopathy but Not Tinnitus or Hyperacusis as Assessed With the Acoustic Startle Reflex”, Martin had an interesting finding. While cochlear synaptopathy occurred as expected after exposure at 75 dB and it was not seen after exposure to 70 dB, there was no evidence of hyperacusis or tinnitus after either exposure. These negative findings have important implications for the putative role of central auditory hyperactivity in tinnitus and hyperacusis.

More recently, Martin has published an important paper on “Sound-Based Treatments for Tinnitus and Hyperacusis in Humans and in Animal Models.” In it, he describes how the past decade has seen a vast expansion of sound therapies for tinnitus and hyperacusis. New options beyond broadband include various notch-filtered sounds around the tinnitus pitch as well as numerous frequency specific tones.  However, a general consensus is that there have been too few placebo-controlled trials that isolated the sound therapy component from other aspects of treatment.  Another problem is that outcome measures have varied widely between studies with many too reliant on questionnaires, which are generally more susceptible to placebo effects.

In a small study of hyperacusis patients with good low-frequency hearing, average high-frequency losses of 30 dB, and LDLs that were 30–40 dB below normal at all frequencies, Noreña and Chery-Croze (2007) showed that 15 weeks of treatment with audiometrically-matched tones resulted in 10–15 dB improvements (increases) in LDLs across frequency.  While the study was not placebo-controlled, only limited benefits (<5 dB) were seen after 2 weeks of treatment, and measurements made 1 month after the end of the full 15 week treatment period showed that LDLs had significantly decreased again.  This suggests that sound therapy was responsible for the reported LDL increases, and that sound therapy needs to be maintained if its full benefits are to be retained.

We look forward to ARO 2019 in Baltimore where we will continue to expand collaboration and bring more researchers together to find a cure.