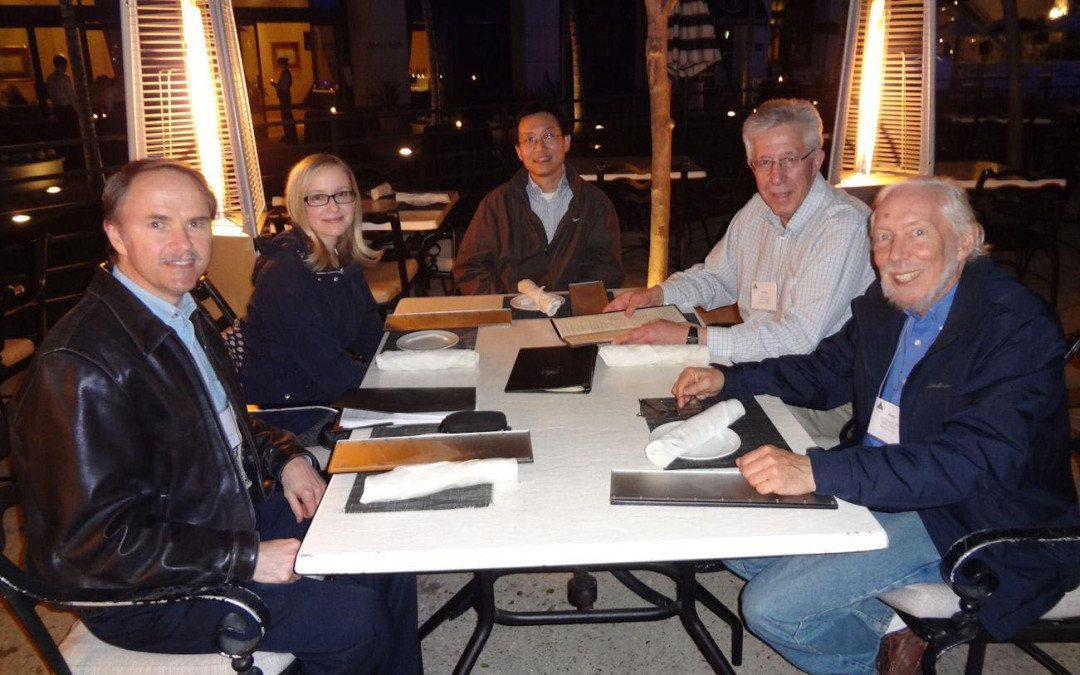 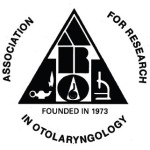 Bryan Pollard, President of Hyperacusis Research, attended two days of the 2014 Association for Research in Otolaryngology (ARO) Mid-Winter Research Conference in San Diego, CA.  There were a number of informative lectures and poster presentations on topics related to hyperacusis (uncomfortable or painful loudness sensation) and tinnitus (a phantom noise sound percept). See the 600-page abstract summary book for details.

Bryan also met with over a dozen top researchers to specifically discuss hyperacusis. Some of the key researchers included: 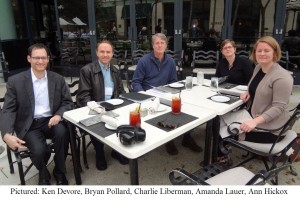 Charlie Liberman and Ann Hickox have examined whether noise-induced cochlear neuropathy is key to the generation of hyperacusis or tinnitus. Their recent work with animals has shown that a neuropathic noise exposure can cause immediate, permanent degeneration of the cochlear nerve despite complete threshold recovery and lack of hair cell damage.

Despite a significant reduction of the Wave 1 auditory brainstem response, a measure of cochlear nerve activity, subsequent peaks were unchanged or enhanced. This finding is consistent with compensatory neural hyperactivity in the auditory brainstem.  The rapid post-exposure onset of both cochlear neuropathy and exaggerated startle-based behavior suggest a role for cochlear primary neuronal degeneration in the development of central neural excitability, a condition that may be causally related to hyperacusis.

Liberman described how the synaptic ribbon fibers connecting hair cells to the auditory pathway can be damaged even though the hair cells survive and – more importantly – how this type of damage is typically not detectable with normal auditory tests. It is probable that some hyperacusis patients have this type of neural damage in the cochlear hair cells and such damage contributes to their hyper-responsivity to sound.

Amanda Lauer has researched hyperacusis in canaries with permanent hereditary high-frequency hearing loss.  The abstract of her paper on the topic states: “The mechanisms that underlie hyperacusis are poorly understood, due in part to the lack of a behavioral animal model. Traditional self-report methods used to measure loudness and loudness discomfort are not suitable for use with animals because the animals cannot provide subjective responses about the magnitude of an internal psychological perception. Instead, reaction time (RT) measures have been used in animals to estimate loudness perception.  “In the present study, the authors demonstrate that RTs are shorter at moderate and high sound levels in canaries of a strain with a hereditary high-frequency hearing loss than in normal canaries, indicating increased loudness. As far as we know, this is the first report of hyperacusis in a nonhuman animal and demonstrates that RT is a potentially useful measure in animal models of hyperacusis.”

Rich Salvi, Wei Sun, Sarah Hayes, and David Mountain met with Bryan to discuss various diagnostic methods that may be used to discern possible mechanisms at work with hyperacusis patients.  Possible methods include  Electrocochleography (ECOG), Positron Emission Tomography (PET) scans, Auditory Brainstem Response (ABR), and Middle Latency tests.  The challenge is that these tests are typically quite loud (above 90 decibels) and therefore cannot be used with hyperacusis patients. It’s possible there could be diagnostic value at lower sound levels, but more research needs to be done in this area.

Sarah Hayes co-presented a poster describing a blunted stress response in rats, which suggests that unilateral noise exposure may result in a malfunction of the HPA axis similar to that seen in human tinnitus patients.  The implication is that stress hormones normally released in response to stressful situations are not released in those individuals who have experienced noise exposure. The failure to release these hormones may, in turn, negatively affect the physiologic response to stress. Hyperacusis Research is interested in learning more about how these findings might apply to hyperacusis.

Marlies Knipper and Lukus Ruttiger have studied tinnitus and hyperacusis in aging rats and their research shows that auditory thresholds increase and auditory response range decrease as the animal ages. Loss of auditory function is related to a loss of Inner Hair Cell (IHC) synaptic structures, similar to recent research on aging mice. Characteristic changes with age are similar to changes observed after exposure to traumatic levels of sound. Preliminary results from behavior studies on young and elderly rats show that the brain may somehow compensate for the peripheral loss, thus preventing tinnitus or hyperacusis.

Knipper also described recent animal studies that have revealed a type of permanent cochlear damage, independent of a loss of hearing thresholds. This subtle damage is linked to a permanent and progressive degeneration of auditory fibers that occurs in association with damage to the inner hair cell synapses (supporting similar concepts presented by Charlie Liberman). Afferent neuronal degeneration might be involved in hyperacusis and tinnitus.

The main risk factors for developing tinnitus and/or hyperacusis are hearing loss, stress and age. Both tinnitus and hyperacusis have been discussed in the context of a pathological increased response gain in subcortical brain regions as a reaction to deprivation of sensory input. New studies confirm the involvement of peripheral deafferentation for tinnitus and hyperacusis, but suggest that these disorders result from different brain responses to different degrees of deafferentation. That is, while tinnitus may arise as a failure of the brain to adapt to deprived peripheral input, hyperacusis may result from an over-adaptive increase in response gain.

Moderate and high stress levels at the time of acoustic trauma might play a pivotal role in the vulnerability of the cochlea to acoustic damage and subsequent development of tinnitus and/or hyperacusis. Hyperacusis Research appreciates that Knipper is examining both peripheral and central mechanisms in one comprehensive model.

Fan-Gang Zeng is also developing models that suggest a significant difference between hyperacusis and tinnitus. One proposed model uses a systems engineering approach to delineate the relationship between tinnitus and hyperacusis as a result of either hearing loss in the ear or an imbalanced state in the brain. Hyperacusis Research believes that this type of research – i.e. clearly identifying the differences between tinnitus and hyperacusis mechanisms – will be instrumental in eventually finding a cure for hyperacusis.

A wide spectrum of interesting research findings was presented during the ARO conference (e.g. studies measuring hyperactivity in various parts of the brain; research on neural damage in the cochlea region; using new treatments to improve negative auditory cortex changes in the elderly; etc.). Other highlights:

Jos Eggermont, Professor of Department of Physiology and Pharmacology, University of Calgary, reviewed evidence on the effect of passive sound exposure on central and peripheral auditory function and considered implications for hearing disorders (tinnitus, hyperacusis and impaired hearing). He presented a study showing that exposing normal hearing adult cats to an enhanced acoustic environment for 4-5 months did not result in hearing loss, but did result in a profound loss of sensitivity for cortical neurons in the 4-20 kHz range.

Exposure to the same enhanced acoustic environment at 68 dB SPL for about six weeks showed the same loss of sensitivity, which recovered only incompletely after 3 months in a quiet environment. Interestingly, the recovery of sensitivity in the 4-20 kHz range was accompanied by tonotopic map changes in auditory cortex in that frequency region. A mechanism combining habituation and frequency-dependent changes in lateral inhibition may explain the maladaptive effect in normal hearing animals.

The primary insight here is that changes in the auditory pathways occur well beyond established OSHA guidelines for hearing loss.  This further supports the need for monitoring sound levels that all individuals (particularly those with hyperacusis) are exposed to.

Craig Formby, Research Professor, University of Alabama, summarized the history of therapeutic strategies using moderate- and high-level sound to attack two of the most intractable audiological conditions: limited sound tolerance and tinnitus.  In 1991, Hazell & Sheldrake described a novel sound-therapy application of low-level broadband noise to treat tinnitus patients, who also suffered clinically significant hyperacusis. The successful application of low-level sound therapy to treat tinnitus and hyperacusis subsequently became the foundation for Tinnitus Retraining Therapy (TRT). Despite reports over the past 20 years of successful applications of low-level sound therapy, principally in the TRT literature, randomized trials and controlled investigational studies have been lacking.

Formby’s controlled studies of low-level sound therapy support Hazell and Sheldrake’s seminal findings. He showed that the application of low-level sound therapy, in combination with specialized counseling (focused on hearing loss and a restricted dynamic range), can successfully be applied to expand the auditory dynamic range of typical hearing-impaired listeners, with or without primary tinnitus or hyperacusis.

This promising treatment approach offers audiologists a new clinical tool to treat sensorinueral hearing loss and to enhance hearing-aid benefit, with less reliance on wide dynamic range compression. It should be noted that in one study Formby referenced, a patient only needed a 10dB improvement in LDL to be considered a success. It would seem patients would need substantially greater improvement to be deemed a success, i.e. recovering to what is considered normal LDLs levels. (The study cited did mention other patients who had improved as much as 50dB.)  Also noteworthy: Formby found that about half of the hyperacusis patients he analyzed at the University of Maryland experienced pain.  This is a much higher percentage of patients with pain than most clinicians have acknowledged.

Bryan also met with Tanisha Hammill, Senior Research Administrator at the Hearing Center of Excellence, which was established by the Department of Defense to address the significant rise in auditory injuries among military veterans. They discussed the need for better diagnostic tools to determine which veterans have hyperacusis and how to get treatment for them.