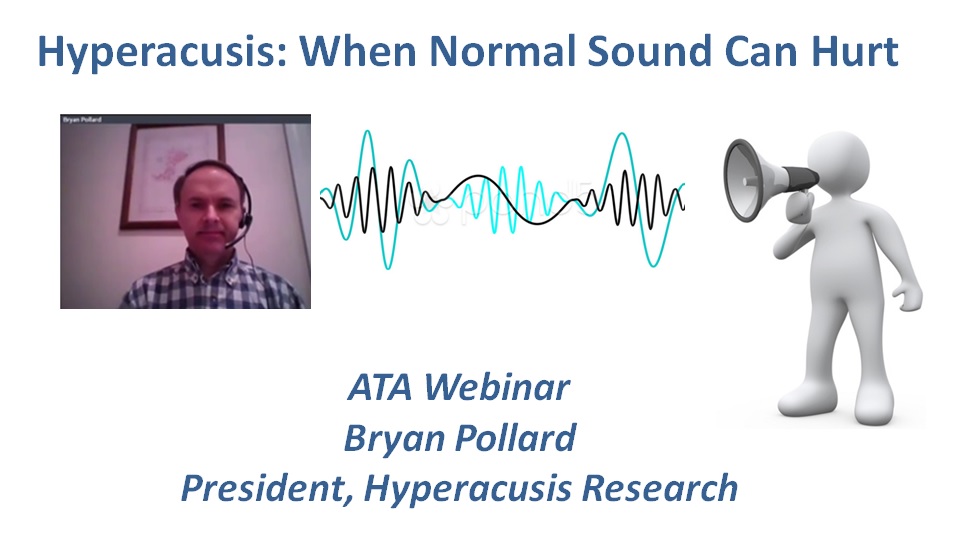 Hyperacusis Research was grateful to participate in the American Tinnitus Association webinar on hyperacusis.  The full webinar is available to paid members of the ATA at the ATA members section of their website at ata.org.

A  key guest speaker was Bryan Pollard, founder and president of Hyperacusis Research. In the 2014 NHIS survey, he noted, 6% of the population answered yes to the question: “Do everyday sounds, such as from a hair dryer, vacuum cleaner, lawnmower, or siren, seem too loud or annoying to you?” About one third of those who answered yes considered their sound sensitivity to be a moderate to severe problem.

Severe hyperacusis is rare, and it is imperative to keep the topic in the news to boost interest. The most impactful media exposure was the ABC News 20/20 segment in February 2014. On Google, an average of 1,650 people a day search for “hyperacusis.”

One of our three scientific advisors, Dr. Richard Salvi of the University at Buffalo, spoke about brain activity in the auditory pathway. Often, hyperacusis patients have an audiogram that is clinically normal but show substantial hearing loss in higher frequencies, which are not routinely tested.

Bradley Vite, an anti-noise activist from Elkhart, Indiana, spoke about his work to tighten noise regulations in his hometown and his efforts to “change the paradigm in this country relative to illegal and unhealthy noise.”

He made the apt comparison of noise with smoking. “Tinnitus and hyperacusis are far more serious matters than smoking, because people have a choice to smoke and most public places are now smoke-free.” Noise, however, is often unavoidable.

In his hometown, it took years of effort, but Elkhart now levies stiff fines for noise violations and employs a dedicated police officer whose sole job is enforcement of noise regulations.