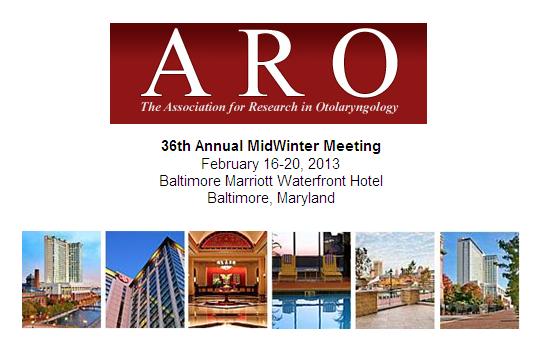 Hyperacusis Research participated in the 2013 Association for Research in Otolaryngology (ARO)  Midwinter Meeting by introducing the workshop on Hyperacusis.  This effort was made possible by a partnership with Dr. Peter Steyger from the Oregon Hearing Research Center at OHSU (Oregon Health and Science University) and the Hearing Health Foundation. This four day event is a premier event for ear researchers to showcase their work.  The event includes over 1100 presentations and posters from the brightest minds in the field including both leading researchers from top universities and their students presenting their best work.  While research on tinnitus has become a stronger part of the program in recent years, as was evident from two workshops and many posters on the issue, this was the first time hyperacusis had a dedicated workshop.

Prior to the workshop, a dinner was held with many of the speakers, our scientific advisor Professor David Mountain from Boston University, Andrea Boidman from the Hearing Health Foundation and Peter Steyger.  This dinner was a great opportunity to share ideas and discuss the challenges we face to advance research for hyperacusis.  Everyone agreed we need a better definition of the problem and clearly need stronger epidemiology data.  There was much discussion about the issue of pain that some hyperacusis patients experience as well as the aural fullness that often follows new noise exposures.  There is very little data to indicate what percent of patients experience pain. 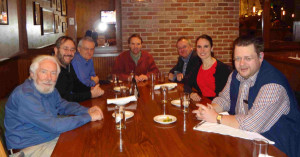 The workshop was attended by nearly 200 researchers and it generated a lot of interest and discussions following the event.  A brief summary of each topic is given below.

Bryan asked the audience to focus on four key words: Pain, Patient, Problem, Plan. Bryan first explained that aural fullness and ear pain did not seem like rare symptoms based on the experiences of hyperacusis patients he knew.  Some patients who tell their stories indicate some sort of pain when exposed to noises such as loud music or lawn mowers. 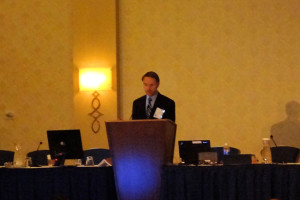 The key problem underlying hyperacusis is that there is little understanding of the actual mechanism underlying the issue.  Also there is a gap in the number of researchers considering the problem of hyperacusis. Finally, Bryan laid out the near term plans for Hyperacusis Research Limited which includes funding research for improved diagnostic methods or research on possible mechanisms.

Brian started off by giving some definitions of hyperacusis.  Hyperacusis refers to abnormally sensitive hearing, such that normally tolerable sounds are perceived as excessively loud and/or as unpleasant. He also said he should add pain as a possible impact.  He said it is useful to distinguish between cases where sounds are perceived as louder than normal, and cases where sounds are not abnormally loud but are nevertheless aversive. 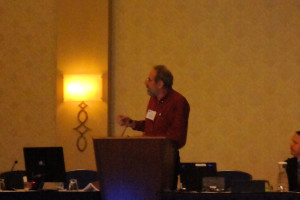 Brian described a few possible mechanisms that can lead to greater than normal loudness: (1) Defective operation of the stapedius reflex can lead to greater loudness of low-frequency sounds. (2) Loudness recruitment associated with cochlear hearing loss involves a more rapid than usual growth of loudness with increase in stimulus level once the elevated detection threshold is exceeded. (3) The gain of the central auditory system may be increased following peripheral hearing loss. (4) The functioning of the efferent system may be impaired. This system serves to regulate the gain of the active mechanism in the cochlea. If a signal is sent from the brain to the cochlea with “instructions” to reduce the gain, but the actual gain reduction is less than it should be, the mismatch may be interpreted as excessive loudness. Brian’s summary emphasized that hyperacusis can occur via a variety of mechanisms, both peripheral and central and more research is needed to discover the underlying mechanisms. 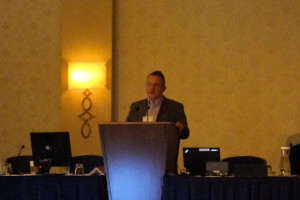 David acknowledged that data regarding the epidemiology of hyperacusis is sparse. Indications are that 40% of individuals with clinically significant tinnitus experience reduced sound tolerance. Baguley and McFerran (2011) derived an estimate of the prevalence of significant hyperacusis at 2% of the adult population. If correct, this indicates a public health problem of some significance. He also described a number of medical conditions which can involve hyperacusis, including Lyme Disease, Addison’s Disease, head injury, migraine and depression. In many cases, however, the sound tolerance issues remain idiopathic.  Overall this presentation emphasized the need for a much stronger epidemiology study to help drive the prioritization of more hyperacusis research. 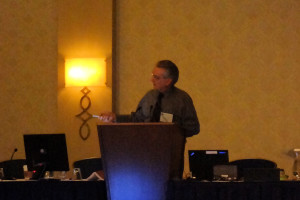 James described the key challenge to diagnosing hyperacusis: there is no specific physical exam or imaging tests that provide a standard to accurately diagnose and assess hyperacusis. Loudness Discomfort Level (LDL) diagnostic testing currently performed by audiologists has a high degree of subjectivity. Additionally, LDL testing can induce anxiety in patients with hyperacusis, as they are required to listen to sounds that push their limits of sound tolerance. There is currently no measure of overall hyperacusis impact that combines both psychological and functional impact. James has developed a brief assessment tool, the Tinnitus and Hearing Survey (THS), which includes questions designed to determine if a patient has any degree of a sound tolerance problem. Using the THS, patients with severe sound intolerance are scheduled for a full assessment using primarily the Sound Tolerance Interview to diagnose the extent of the problem and to determine treatment options. Further testing may include in-clinic trials of ear-level sound generators to determine their potential utility in mitigating the condition.  James also described some possible mechanisms for hyperacusis: biochemical changes in the peripheral auditory system, auditory efferent dysfunction, a change in central auditory gain, and alterations in the limbic response systems to loud sounds. 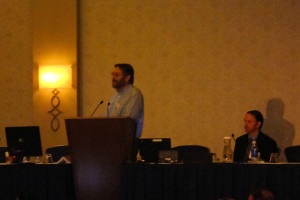 Currently, primary treatment approaches have centered on sound therapy to desensitize the patients’ responses to certain sounds. A popular approach is a habituation training process based on the Tinnitus Retraining Therapy (TRT) methodology which was established by Jastreboff & Hazel for improving tinnitus patients’ condition. There are numerous approaches that are similar from pink noise for music players to neuromonics. Another aspect is that the etiology of hyperacusis can vary, and therefore it is important to recognize that each hyperacusis patient is different.  Because of these differences, the emphasis in this presentation was to personalize treatment plans for each patient.

Additionally a patient story was given.  Our Patient Stories section gives similar stories.  The common surprise from researchers in the audience was learning that some patients with hyperacusis experience significant pain for sustained periods of time.

The ARO is an international scientific society composed of basic scientists and clinicians who are actively investigating basic science and clinical problems associated with hearing, speech, balance, smell, taste and diseases of the head and neck. The ARO provides a forum for the interchange of information through its peer reviewed journal, JARO, and via a professional yearly meeting.