Hyperacusis at the 2018 University of Iowa Conference 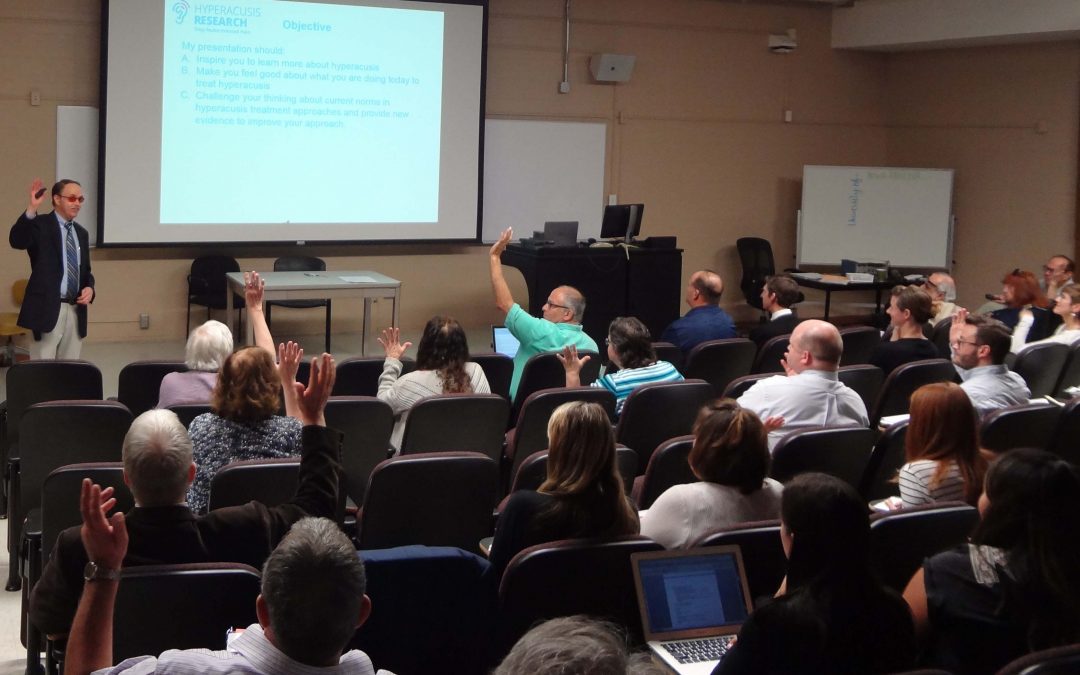 Hyperacusis Research president Bryan Pollard spoke to doctors and audiologists at the University of Iowa’s 26th Annual International Conference on the Management of the Tinnitus & Hyperacusis Patient.  Bryan’s topic was “Innovating a Better Future for Sufferers of Hyperacusis with Pain.”

Bryan started with a focus on listening to the voice of the patient as he shared the Cure for Cindy video.  Bryan then shared two other hyperacusis patient stories and their treatment approaches including tinnitus retraining therapy (TRT).  The patient who improved the most actually chose his own approach which included moving to remote quiet house for a period of time and which was followed by a gradual exposure to louder sounds.  The variability of results with current treatment approaches is one of the reasons further research is needed to find a cure for all – especially those who have noise-induced pain.

Next Bryan described the need to advance clinical understanding.  A key mechanism Hyperacusis Research is relying on is our Sanford CoRDS Hyperacusis Survey.  With over 200 participants this data has the most comprehensive information for those who experience hyperacusis with pain.  Bryan shared the results with a unique approach to describing the life of a “classic patient” with example statements below:

Bryan next described a new Hyperacusis Assessment Method by Greenberg and Carlos. The new tool, called the Inventory of Hyperacusis Symptoms (IHS), was developed to measure symptom severity, treatment outcomes, and diagnostic differentiation.  While there are a number of potential advantages of this tool compared to the current “Hyperacusis Questionnaire” by Khalfa, this new tool includes the topic of pain.

Bryan next focused on the work to advance research for hyperacusis starting with a paper by Londero, et al., titled “A Case of Acoustic Shock with Post-trauma Trigeminal- Autonomic Activation Front.”  While middle ear effects are frequently overlooked as potential players in hyperacusis with pain, this work describes a potential cascade of events that could explain many aspects for some patients. A patient who worked as a general medical practitioner at the time of acoustic shock which resulted from nearby gun fire was able to take unique steps to document his experiences starting with a photograph of his eardrums.  The patient’s chronic symptoms included tinnitus, otalgia, tingling in the ear, tension in the ear, and red tympanum as well as pain in the neck and temporal region.  The authors suggest that these symptoms may result from a loop involving injury to middle ear muscles, peripheral inflammatory processes, activation and sensitization of the trigeminal nerve, the autonomic nervous system, and central feedbacks.

Some of the most advanced animal model work on hyperacusis with pain is being completed at the University at Buffalo.  Bryan described Senthilvelan Manohar’s Auditory Nociception Test (for more details, see the grant Hyperacusis Research funded in 2017). The Auditory Nociception Test (ANT) is based on a traditional pain threshold assessment. Although animals show an elevated pain threshold in the presence of 90 and 100 dB, at 110 and 115 dB they show a reduced pain tolerance.  This can be used to develop models that can be used to uncover mechanisms of pain in hyperacusis.

Bryan concluded by emphasizing that clinicians should take a very personalized approach to patients and work with each one carefully to ensure they can make forward progress without having setbacks.