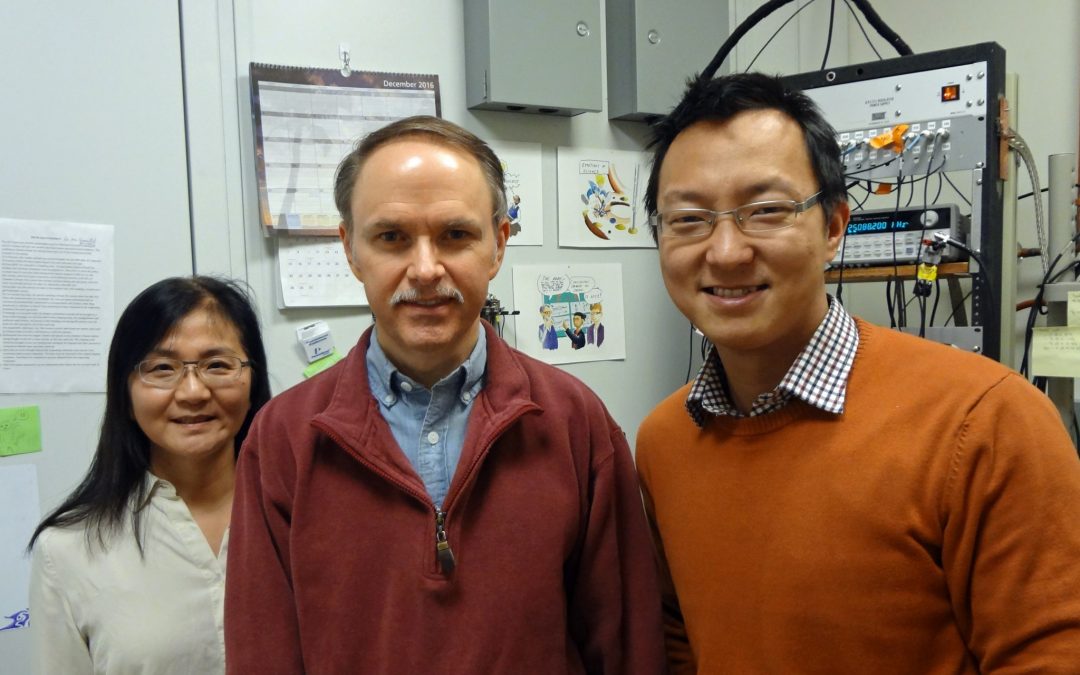 Bryan Pollard, President of Hyperacusis Research, was recently given a tour of research labs at Mass. Eye and Ear Infirmary which is a Harvard Medical School teaching hospital and world-renowned research center.  The research overview was led by Heidi Nakajima, an Assistant Professor of Otolaryngology, along with Xiying Guan, a postdoctoral research fellow of Eaton-Peabody Laboratories and recipient of our 2016 grant award.

Bryan saw the surgical center and the Nakajima Middle Ear Mechanics Lab including a sound isolation booth and equipment essential to develop and conduct specialized tests for patients and temporal bones.  Bryan was able to view a temporal bone specimen through a microscope and see the various features (as seen in the diagram below) including the tympanic membrane, the stapes, round and oval windows of the cochlea.  The most surprising element of viewing a live specimen was the large amount of bony structure surrounding the cochlea.  When asked about how the bony structure is removed for detailed cochlear analysis, Heidi said it is dissolved in a special chemical which takes one year.  One room contained many hundreds of temporal bones in various states of dissolution. 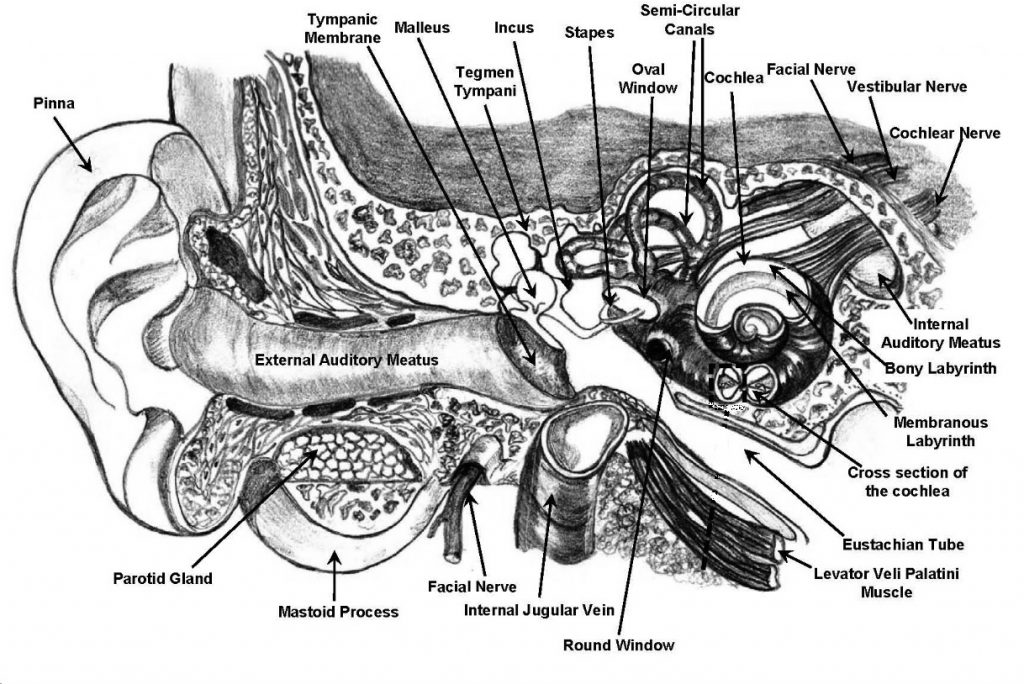 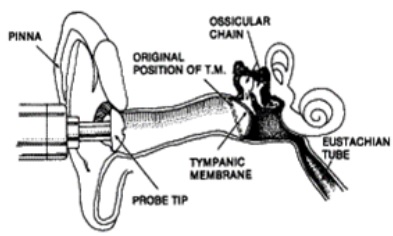 Heidi provided a detailed overview of some of her work with power reflectance and new laser measurement methods for middle ear functional analysis.  Traditionally, the most common method to evaluate the middle ear is tympanometry using various probe tones introduced directly into the ear canal (see image to right). However, studies have shown that tympanometry has low sensitivity to identify conductive disorders in infants.  To mitigate the limitations of typanometry, many advancements have been made in the last few decades in the use of  acoustic reflectance. Wideband power reflectance is the ratio between the reflected and incident energy presented to the external auditory meatus by a probe, therefore representing the amount of energy reflected by the tympanic membrane (see additional details here). 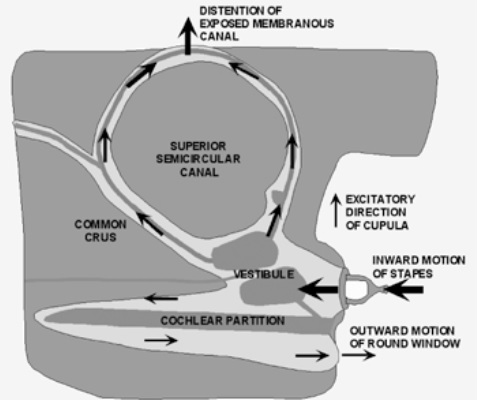 In a 2013 paper “Assessment of Ear Disorders Using Power Reflectance”, Heidi describes the advantages of the power reflectance diagnostic tool.  Power Reflectance (PR) measurements in conjunction with audiometric measurements of air-bone gap can help differentiate among stapes fixation, ossicular discontinuity and superior semicircular canal dehiscence (SCD). The diagram at the left shows an opening at the top of superior semicircular canal as a classic model of SCD.  Superior semicircular canal dehiscence is the introduction of an abnormal ‘third-window’ into the inner ear due to the development of an opening in the osseous labyrinth of the superior semicircular canal. Symptoms vary considerably, ranging from classic third-window or perilymphatic fistula symptoms to vague vestibular and/or auditory manifestations including hyperacusis. Thus SCD is known as a great mimicker of other disorders. For example, some patients have only an air-bone gap similar to otosclerosis, while others only complain of ear blockage similar to eustachian-tube dysfunction, or autophony. Others have intermittent vague dizziness without clear inciting stimuli, similar to many vestibular and neurologic diseases, either in combination or without auditory symptoms.

Because sound energy can leave the inner ear via the dehiscence, SCD can produce a decrease in the impedance sensed by the stapes at the oval window during sound stimulation. Power Reflectance  measurements of ears with SCD have shown a distinct local minimum or notch around 1 kHz. The SCD Figure below compares PR measurements taken from six ears with SCD with the normal range of PR response  The good news for hyperacusis sufferers is that this test can be done at 60dB so it should be tolerable by most. 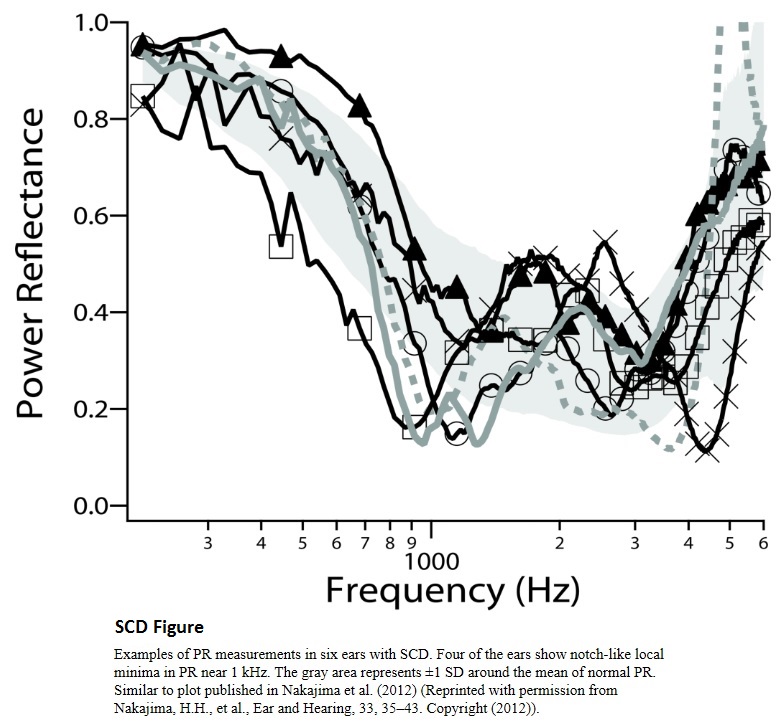 Some of the most exciting work from Heidi and Yixing relates to new methods to measure intracochlear sound pressure.  The background of this work can be found in this 2008 paper “Differential Intracochlear Sound Pressure Measurements in Normal Human Temporal Bones.”

Using the above concepts, Heidi described more recent work whereby a third window was introduced to force an SCD-like condition in a temporal bone.  Next a reinforcement of the round window was performed (similar to surgery performed for SCD patients).  This data indicates that the round window reinforcement does not reduce the effects of the third window and therefore is not supporting a model for any benefits to SCD or hyperacusis patients.

This work is now being extended to human patients with laser measurements of the tympanic membrane in response to 80 to 100dB sounds with the goal of offering more precise diagnostic tools for complex conditions.  Bryan discussed the need for the development of a similar diagnostic tool at lower dB levels for evaluating hyperacusis patients.