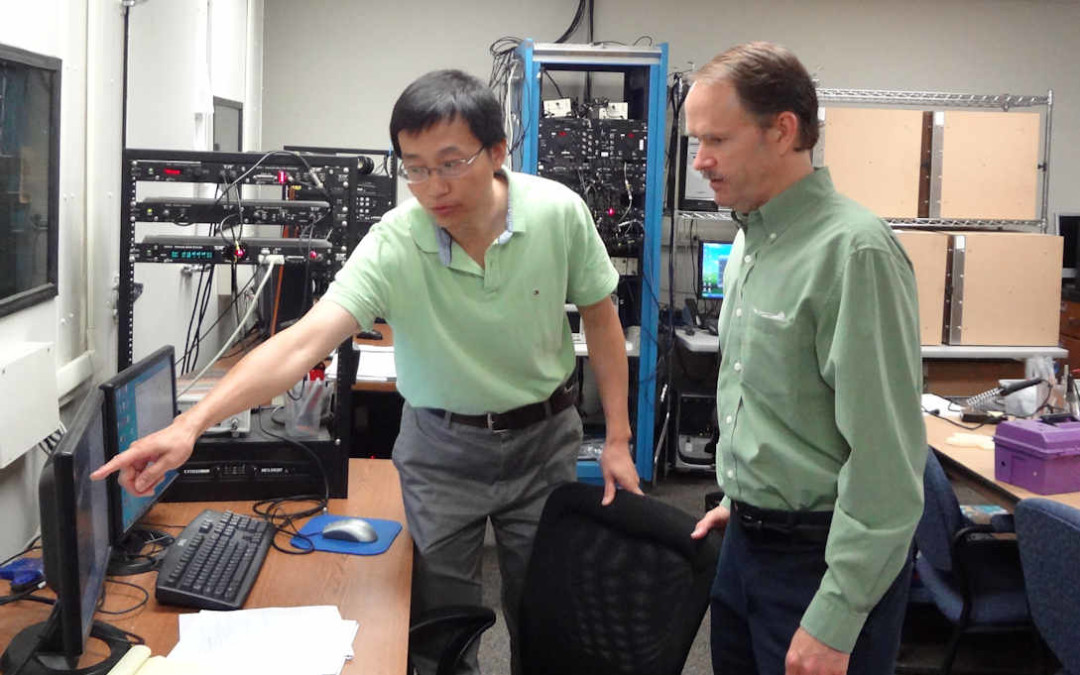 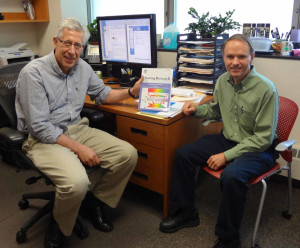 Rich Salvi, the director of the Center for Hearing and Deafness at SUNY Buffalo, hosted Bryan Pollard to review their research and hyperacusis.  Dr. Salvi, who is a Scientific Advisor for Hyperacusis Research, also gave our first online Webinar. We are extremely grateful for the SUNY Buffalo researcher’s interesting understanding the mechanisms of hyperacusis that will lead to a cure. For the visit, Professor Salvi gave Bryan a tour of their impressive research labs and facilities. The Center occupies 11,000 square feet of space, consisting of a molecular biology lab, two anatomy labs, multiple noise exposure booths, a blast tube for acoustic overpressure, multiple auditory evoked response labs, a dedicated auditory perception behavioral lab, a human clinical lab, a cell culture room, and two surgery rooms. 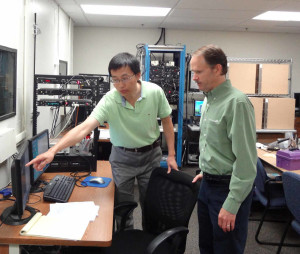 Dr. Wei Sun demonstrated some of the ways the trained mice are used for various studies (see picture at left of Wei Sun and Bryan Pollard in a lab). Wei Sun described his work that was first described in the paper “Early age conductive hearing loss causes audiogenic seizure and hyperacusis behavior” which was published in Hearing Research. The paper begins with clinical reports which found a high incidence of recurrent otitis media (ear infections) in children suffering hyperacusis. Wei Sun’s experiments indicate that early age conductive hearing loss can impair sound tolerance (increase noise sensitivity) by reducing GABA inhibition in the IC, which may be related to hyperacusis seen in children with otitis media. 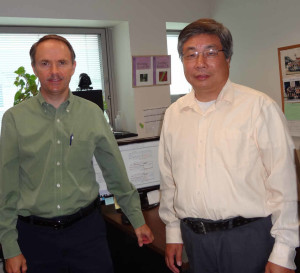 Dr. Guangdi Chen (see picture at right) and Adam Sheppard described their work showing the role parts of the brain such as the Amagdala may be playing in hyperacusis and tinnitus. Their work shows when mammals loose the higher frequency part of their hearing the lower frequency is more sensitive because the higher frequency is no longer present to suppress the lower frequency. One paper Dr Chen contributed to along with Professor Salvi and others at SUNY Buffalo, “Salicylate-induced cochlear impairments, cortical hyperactivity and re-tuning, and tinnitus” demonstrates the various parts of the auditory system affected by high doses of aspirin in mammals. The results “suggest that SS-induced hyperactivity in auditory cortex originates in the central nervous system, that the amygdala potentiates these effects and that the SS-induced tonotopic shifts in auditory cortex arises from the interaction between the frequency-dependent losses in the cochlea and hyperactivity in the central nervous system.”

Next Bryan met with Sarah Hayes who is investigating the role of stress in generating tinnitus. The major aims of Sarah’s research project are to (1) determine if chronic stress increases susceptibility to noise-induced tinnitus and (2) determine the ability of chronic stress to alter GABAergic inhibition along the auditory pathway as a potential mechanism by which stress may contribute to auditory dysfunction. Some of these same mechanisms can also be investigated for their role in susceptibility to hyperacusis. 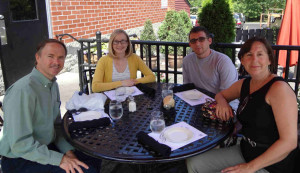 Bryan had lunch with Sarah Hayes, Adam Sheppard, and Dr. Chris Stocking who works at the UB Speech-Language and Hearing Clinic (see picture at left). Dr. Stocking explained that the Tinnitus Clinic sees patients with hyperacusis. She also described their treatment approaches which can be seen on their website. During this discussion, Adam had some interesting ideas about the roll K+ (potassium) channels in machnoreceptors in the lower part of the central auditory system may be playing in auditory disorders.  For additional detail, see this paper: “KCNQ4K+ channels tune mechanoreceptors for normal touch sensation in mouse and man.”

Dalian Ding described his work demonstrating how certain cancer drugs create ototoxic effects that can kill hair cells. The amazing part of this work is that with larger doses cell survive because the cells recognize the foreign substance and reject it. Of course some hyperacusis patients had their initial onset of hyperacusis from a given ototoxic drug.

Senthilvelan Manohar has contributed to several key papers including this one: “Amygdala hyperactivity and tonotopic shift after salicylate exposure.” This paper builds on other works and concludes with the following idea: “These results indicate that systemic salicylate treatment can induce hyperactivity and tonotopic shift in the amygdala and infusion of salicylate into the amygdala can profoundly enhance sound-evoked activity in auditory cortex, changes likely to increase the perception and emotional salience of tinnitus and loud sounds.” Next, Senthilvelan described the poster presented at the 2013 ARO conference (see ARO Abstract Book #529): “Noise Induced Hearing Loss: Effects on Glutamatergic, GABAergic, Neuropathic and Inflammatory Gene Expression Changes in Rat Cochlear Nucleus.” The work showed that noise-induced damage to the inner ear reduces the neural activity flowing from the auditory nerve into the cochlear nucleus (CN), but paradoxically the reduced input leads to a significant increase in spontaneous activity in the cochlear nucleus. For rats that had blast induced ear damage, there were neuropathic and inflammatory gene expression changes at 14 & 28 days post noise exposure. Four genes related to pain and neuronal excitability were changed significantly in noise exposed side CN. Ccl12 was down-regulated and Ntrk1, Oprd1 and Kcnq3 were up-regulated significantly. Increased expression of Ntrk1 and Oprd1 receptors on exposed CN may reflect increased proliferation of reactive glial cells and tolerance to pain sensation. Essentially the cochlear nucleus appears to be maintaining an inflammatory response for up to a month later. Additional details on how relevant pain mechanisms work in the body overall can be found in this paper: “Nociceptors—Noxious Stimulus Detectors” by Clifford Woolf and Qiufu Ma. This work has extremely interesting ramifications for hyperacusis, because an inflammation mechanism is one that had been theorized but this is the first evidence to possibly support the idea. 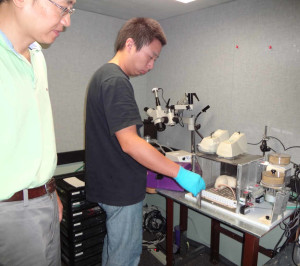 Bryan also had additional lab tours to gain insights into all the ways trained mammels can be used in sound experimentation (see picture at left with Wei Sun and Chao Zhang). Bryan concluded with dinner with Professor Rich Salvi and Wei Sun. Professor Salvi showed a strong interest in continuing to drive efforts to determine the mechanisms behind hyperacusis that can lead to a cure. For more details on some of Professor Salvi’s insights, see the following video recording on the topic of “Remodeling Sensory and Motor Circuits in the Brain: New Insights from Hearing Loss and Tinnitus” which he gave few years ago at Microsoft Research.