LB’s Hyperacusis Story: My guitar had to be loud 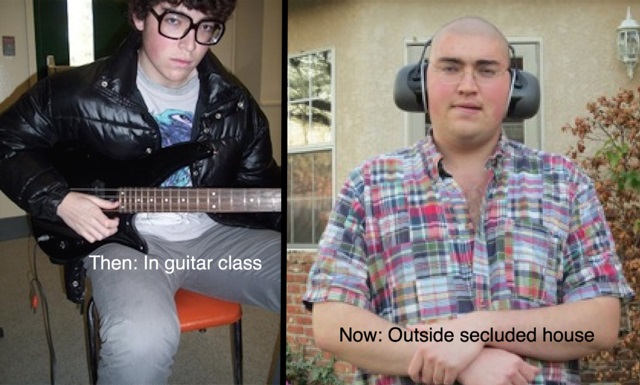 I have always listened to loud music and played loud music, thinking the worst that could go wrong was mild hearing loss when I’m old. At age 14, I started listening to loud music through earbuds. When I started playing bass guitar, it had to be loud or I wouldn’t be satisfied.

I did have some ear weirdness, including occasional ear pain from snare drums and vibrating in one ear from the bass in car speakers. After concerts or school dances, or after flying, my hearing would be muffled for hours. When I’d swallow after flying, I would have prolonged crackling in both ears. I thought it was both interesting and funny. I could never have envisioned that these unusual but unpainful sensations would build up to create the awful situation that I am now in.

On the night of November 4th 2012, after practicing really loud on my new bass speaker, my ears felt weird. That is the best I can explain it. I immediately got earplugs and vowed not to play loud music without them ever again. I never got that chance because the next day I developed tinnitus and felt it best to take a break from playing.

I soon realized that tinnitus would be the least of my worries, as I started getting pain from sounds like ice clinking in glasses and the metal clinking of my belt buckle. I put “sound sensitivity” into Google and found that I had hyperacusis. I was nervous about this, as it could destroy my dreams of a music career. The advice that I received online from the Hyperacusis Network seemed very reassuring but I still felt this was a lot bigger problem than they were saying.

I looked up a doctor who could treat me and flew to Arizona later in the month for our appointment wearing earplugs at the airport and Bose noise-canceling headphones on the plane.

The doctor estimated my loudness discomfort to be around 65 or 70 dB. He provided white-noise generators and I also started using constant sound enrichment. For three months I wore generators for 10 hours a day but stopped because it was uncomfortable having something in my ears all day. I tried sound enrichment through alternative routes for 14 months. I played a white-noise machine continuously and listened to lw-volume music through high-quality computer speakers to try to strengthen my ears.

During this time I kept slightly trying to push the boundaries of the volume I could handle, but with no success. I would just get worse and have to recover before continuing. Setbacks would consist of a burning pain in my ears, similar to the feeling of a bad sunburn, plus louder tinnitus and worse hyperacusis.

Trying to heed the murky advice from my doctor, I never wore hearing protection against sounds that couldn’t “damage” a normal person’s ears. I wore earmuffs only when using the blender or going to the grocery store where the loud checkout beeps and throbbing  refrigerators were unbearable.

During those 14 months, I lost all my friends because I couldn’t be with more than a few people at a time and they found me boring because we could do nothing but talk quietly. Still, my ears would feel winded after a few hours. I had to spend most time indoors where I could recuperate. I spent my days researching my condition, only to find that no researchers or doctors knew what was going on.

As bad as this situation was, it was heaven compared with what came next. On the night of December 31st 2013, a glass bottle accidentally got knocked onto a tile counter while I was bending over. The sound shot right into my left ear, which became muffled for a few minutes. The next day, I felt that my ears were slightly more sensitive but due to the delayed reaction of worsening I was caught off guard.

I was getting hungry so I got in the car wearing improperly inserted foam earplugs (something I didn’t learn to do correctly until later) to get some frozen pizza at Safeway. The car speaker system started blasting on full volume telling me to re-subscribe to OnStar, a GPS service. It was so loud that I thought a helicopter was above me. I fumbled with the volume and eventually got it down. Sounds that were okay before, like the creaks in the wood floor, were now actively painful.

That night, my father texted me saying he had cooked some turkey. Now, this is the best turkey I have ever had, so I couldn’t resist. I drove to my parents’ house wearing earmuffs. While I was in front of their door, the dog barked, which felt like painful shotgun blasts to my head. The pain was more excruciating than before, even with earmuffs, and after 20 seconds of being barked at, my mother finally got the dog into the bedroom.

I took the turkey, drove home, ate and went straight to bed. I woke up the next day to the passing cars outside vibrating my skull. The voice of my girlfriend sent pins and needles through my ears and brain. I was rapidly worsening at this point and realized that I had to wear earmuffs to halt the worsening. And halt it, it did.

I had to move out of the apartment to a secluded home, far from traffic and neighbors. Now here I am, 28 months after that incident, with zero progress. I lost an estimated 45 decibels of sound tolerance from those noise events, down from the prior 70 decibels, and consider myself to have one of the worst cases of hyperacusis currently.

Pain from noise pretty much starts at the threshold of hearing. Laughing hurts, my shirt rubbing against my skin makes a painful rustle, I must whisper instead of using my normal speaking voice, and the nosepiece of my glasses jingling when I take them off feels like my eardrums are being stabbed with needles. I haven’t been able to listen to music in over two years or pick up my bass guitar, my most favorite things in life. I can’t do anything with my girlfriend besides sitting on the couch quietly and whispering. We used to go on nature walks and do things together all day outside. All sounds are painful at this stage and will worsen me if I am not careful.

My girlfriend takes care of me by getting groceries, cooking and cleaning. To manage my condition I have to do absolutely nothing all day and be extremely careful not to have another noise insult, which could easily take away the last of my ear reserves. My days are filled with excruciating ear pain, as my hyperacusis is so severe that most everyday sounds are painful even with earmuffs on. I am now 24 years old, and I have barely been able to leave the house in over two years.