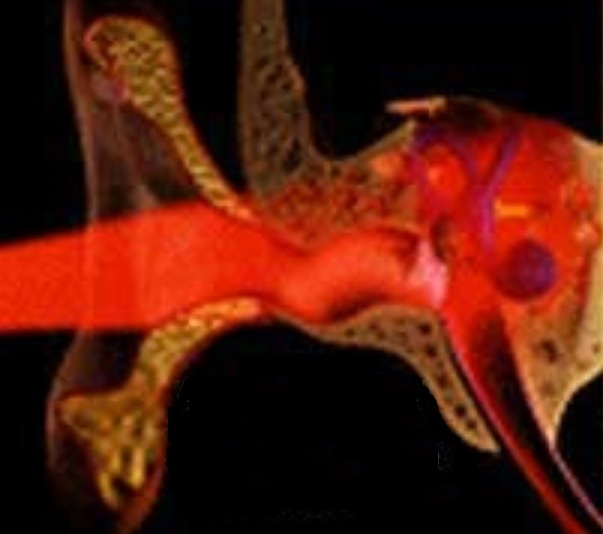 Note:  While Hyperacusis Research has seen a number of positive stories on this approach for hyperacusis, we are not aware of any clinical trials for Low-Level Laser Therapy (LLLT).  We will continue to follow the research and publish any new clinical findings.[i]

Like most people with hyperacusis, my journey has been long and complex, with many promising leads, apparent dead ends, disappointments—but also discoveries and meetings with amazing people—and a lot of, I am told, personal growth.

I would like to briefly summarize my journey and then focus on my personal experience with low-level laser therapy (LLLT) and some implications for improving our understanding of hyperacusis diagnosis and treatment. I have no investment in claiming LLLT is “effective” or that that it will help others—that’s for good science to find out. As a result of my experience, I propose to broaden our metrics for monitoring the impact of treatment beyond Loudness Discomfort Levels (LDL).

I happened to have an audiogram in early January 2008 following several months of tinnitus.  Some of the tones were very uncomfortable, but the tester didn’t mention the possibility of having hyperacusis or even that my response was unusual.  Perhaps they didn’t know about hyperacusis. Otherwise, they might have warned me to be cautious during the test.

About 10 days later, I had a sound injury from someone calling me and their voice projecting into my right ear. I felt a severe sharp pain deep “in” the ear, and became very sensitive to ordinary noise. Looking back, I believe I was already becoming sound sensitive because I had been at a weekend event where there was a lot of noise and door slamming. I’ve often wondered whether some extensive dental work a few months earlier might have been a causative or contributing factor, too. 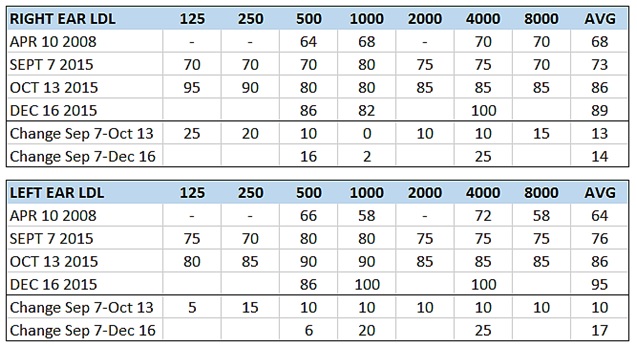 Below are simple averages of my LDLs over time. Note that audiograms one and four have fewer LDL readings, and that the horizontal axis is not to scale. 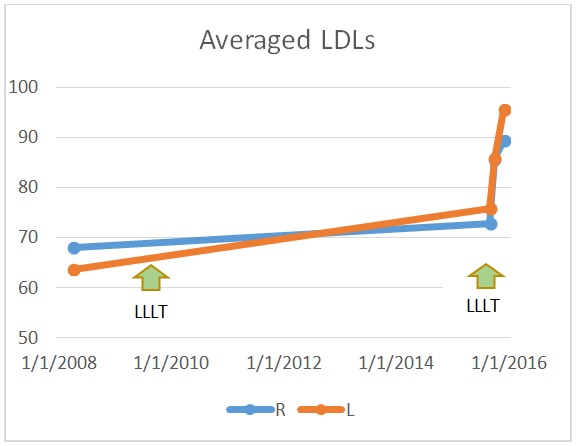 My experience: After LLLT series one, I was better able to tolerate general street noise, delivery trucks and normal conversation; but sounds with “rough timbre” like power tools, crinkling bags, tearing paper and hammering caused reactive tinnitus and/or pain. My frequency of setbacks diminished significantly. I felt I had plateaued by 2009 and still avoided most social gatherings where music was playing. I often wore sound protection when walking in the city. I had gained about 10 decibel LDL improvement up to this point in time.

After LLLT series two, I could tolerate general sounds even better and could attend some social events with no, little or moderate protection. I had to wear some ear protection when going out in Madrid and Barcelona, where there was a lot of construction during my visit. Reactive tinnitus and hyperacusis seem to resolve more quickly, but rough timbre or certain voices still bother me even when well below my LDLs. Still, I can tolerate being in environments where before LLLT I had to wear earmuffs.

I do not get ear pain as quickly, and when I do it goes away faster. In general, life is easier, more comfortable and more available to me. So I believe that LLLT has made a major difference for me, but I still have a way to go.  The doctors in the US and Spain used different approaches, but both looked not only at my ears but also at my overall state of physical wellbeing. Since I don’t have details on their protocols, I can’t compare them.

Taken by themselves, my LDLs say I now have mild hyperacusis. But that’s not yet my experience. LDLs test my response to pure tones in a non-fatigued state. Clearly they are measuring something important, but what?

Because many sounds still remain too uncomfortable for me (like high-pitched voices, power tools, ripping tape), it is unclear what mechanism LLLT is impacting. Do we need to better characterize hyperacusis with dimensions that may more precisely reflect the full functionality of the auditory system, such as: Sound-fatigue (reduced tolerance as the day goes on or when tired); sound timbral quality (discomfort leading to pain or tinnitus far below the pure-tone LDL); presence of pain; presence of reactive tinnitus?

Whether LLLT “works” and who’s best suited to it is a matter of scientific inquiry. But are we asking the right questions about how to characterize and evaluate hyperacusis and the other symptoms of noise injury?

In my personal experience, LLLT was very helpful. I would be happy to increase my LDLs, of course, but also need improvement in my tolerance for certain sounds that are well below my LDLs. Perhaps more LLLT will provide additional improvement. Perhaps I have a degree of irreversible cochlear damage that LLLT cannot affect. Perhaps something in the higher levels of the auditory brain centers are affected. Certainly we—as a community—can benefit from being more curious and scientific, and from developing measures that reflect the important components of our experience.

Would I recommend LLLT for someone with hyperacusis? My intent is to tell my story with the goal of promoting a better understanding of hyperacusis and to send the message that LLLT deserves to be researched. Speaking for myself, it has helped substantially, especially with LDLs and to some extent with my ability to be out in the world. Compared with many other medical treatments, its cost is reasonable (though anyone with hyperacusis may have to consider the cost of travel and ability to travel). If you’re considering it, find someone who knows what they’re doing! Protocols and precise “aim” of the tool are very important.

[i] While no prospective randomized or retrospective controlled studies of LLLT have been published to date, two large case series have been. (1) Zazzio M. Pain threshold improvement for chronic hyperacusis patients in a prospective clinical study. Photomedicine and Laser Surgery 2010;28(3):371-377; and (2) Prosper J, Graffelman J. The analysis of audiometric measurements before and after low-level laser therapy of Spanish patients with hyperacusis. (Published as a white paper – no journal given). Publication of an abstract: Prosper J, Hack E. Hyperacusis and other inner ear disorders are improving after light irradiation with photobiostimulation laser. Otolaryngology Head & Neck Surgery 2014;151(1 suppl):P208. Both reported favorable results. Zazzio’s study used LLLT, a pulsed electromagnetic field generator and antioxidants; and the performance of control arms of published tinnitus studies as the comparison (no-LLLT) group. Prosper’s study used only LLLT and patients served as their own controls.