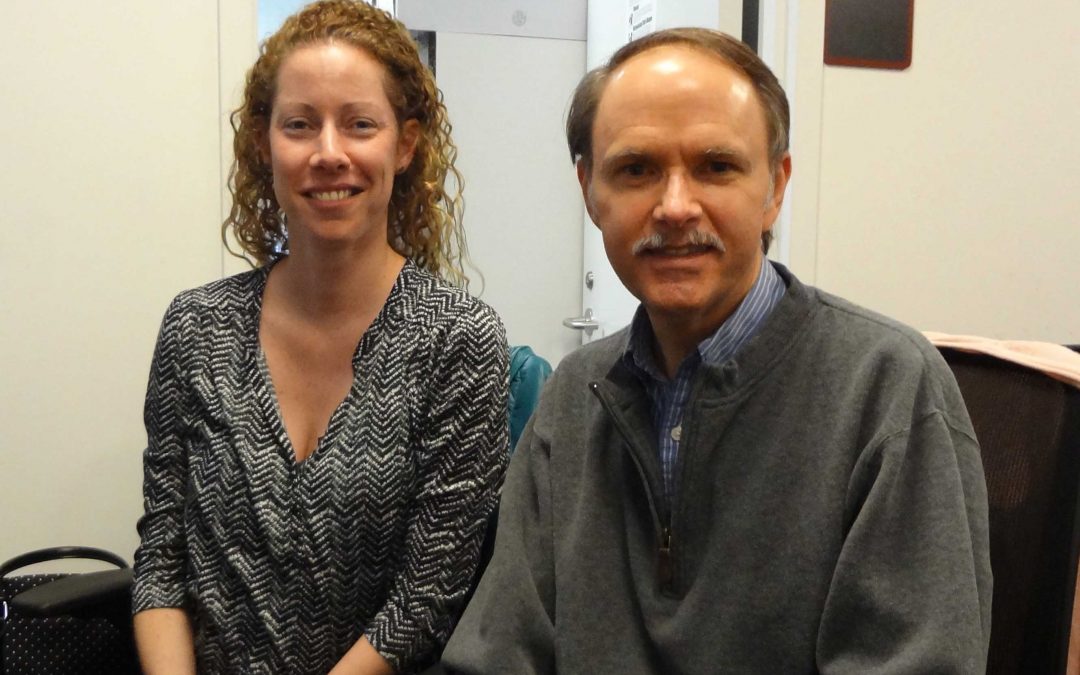 Bryan met with Jennifer Resnick, PhD, who is a postdoctoral fellow working on the neural circuit mechanisms of cortical gain control after auditory nerve damage in an animal model. Jennifer received our Emerging Research Grant from Hyperacusis Research in 2017 (with our partner Hearing Health Foundation). 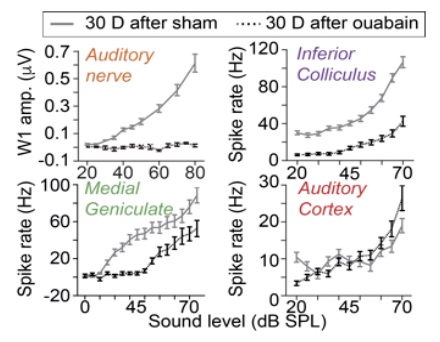 For this work, Jennifer is exploring the role of central auditory system plasticity as a potential the cause of disorders associated with hearing loss. Specifically she is studying the brain’s compensatory mechanisms, after cochlear damage, which allow for basic sound recovery but also introduce chronic hypersensitivity, such as hyperacusis. Like most areas of the brain, the auditory cortex maintains an excitation and inhibition balance within its neural circuits.  With a loss of input, these become imbalanced.

In her experiments, Jennifer is specially targeting the loss of neural connections to the hair cells instead of hair cell loss as this may better represent the condition of many patients.  Hair cell damage results in detectable hearing loss while a large percentage of neural connections can be damaged with no apparent hearing loss.  In the upper left graph, the auditory nerve response to various sound levels is shown before and 30 days after neural damage.  There is very little response at any dB level after the damage.  However, the other graphs show that as you move up the auditory pathway in the brain to the Auditory Cortex (lower right graph), the dampened incoming signal has been enhanced to produce a response similar to the healthy condition.

This shift occurs because of the change in inhibitory and excitatory neural balance.  However there is quite a large variation in the results.  Understanding why this balance can shift to a stronger excitatory mode may help uncover why only a small percentage of those with loud noise exposures get hyperacusis.  This information can further enhance the potential treatments to reverse the imbalance. 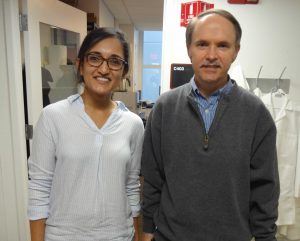 Pooja Balaram, PhD, is a postdoctoral fellow working on the genetic changes underlying increased central gain in a mouse model of sudden unilateral hearing loss. Her work focuses on calcium imaging and in situ hybridization of nRNA, underlying changes in the excitatory/inhibitory balance in the central auditory pathway.  Pooja’s background in visual research provides a good framework to compare how the brain’s auditory responses compares to other sensory systems.  A question she is pursuing is: “What tells the brain to stop compensating with the loss of neural inputs (such as in single sided deafness)?”  Bryan asked about the speed at which the brain’s plasticity begins the compensation process.   Pooja indicated that the neural changes can start within minutes – although the initial changes may not be noticeable.  An opportunity for the future is to specifically work to determine whether the Type II fibers (which appear to carry pain signals from the cochlea) may also be overcompensating in the brain with hyperacusis with pain. 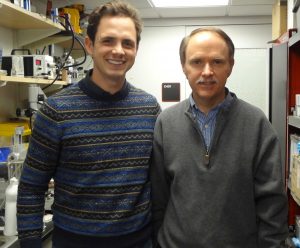 Bryan initially met Ed Hight at the MEEI Gala event where he spoke as both a patient and researcher (Ed has had cochlear implants since he was young).  Ed is a 6th year PhD student in the Speech and Hearing Bioscience and Technology Program at Harvard. Ed developed a special imaging method to track changes in cortical maps after acoustic trauma that causes a permanent threshold shift at high frequencies.  For this imaging method, a window is placed above the auditory cortex (see images in picture below with Meenakshi) allows a large number of neurons to be studied at the same time.  These advanced approaches for measuring neural activity will give important insights for both tinnitus and hyperacusis to further investigate the underlying causes. 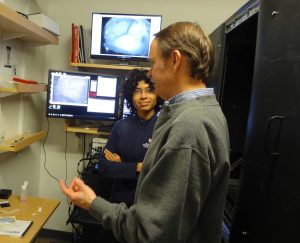 Bryan spoke with Meenakshi Asokan while she was working on active experiments.  Meenakshi is a 3rd year PhD student in the Speech and Hearing Bioscience and Technology Program at Harvard. Meenakshi has been using a special imaging method to track daily changes in central gain from a select population of auditory neurons after a moderate noise exposure.  The noise level causes only a temporary shift in thresholds but a permanent loss of cochlear afferent synapses. This better represents many hyperacusis sufferers who frequently have little to no hearing loss. 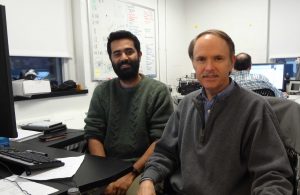 Aravind Parthasarathy is a postdoctoral fellow working on the underlying neural signatures of auditory perceptual disorders such as tinnitus, hyperacusis and impaired processing of speech in noise. Bryan enjoyed discussing Aravind’s work, which uses a combination of EEG, psychophysics and pupillometry in human subjects.  The key challenge with hyperacusis sufferers is to use approaches at the lowest possible decibel level for dection.  One approach for better signal to noise ratios is to utilize frequency based responses rather than time responses based using Fourier transformation.

For a more detailed description of the lab’s work see the Polley Lab website.