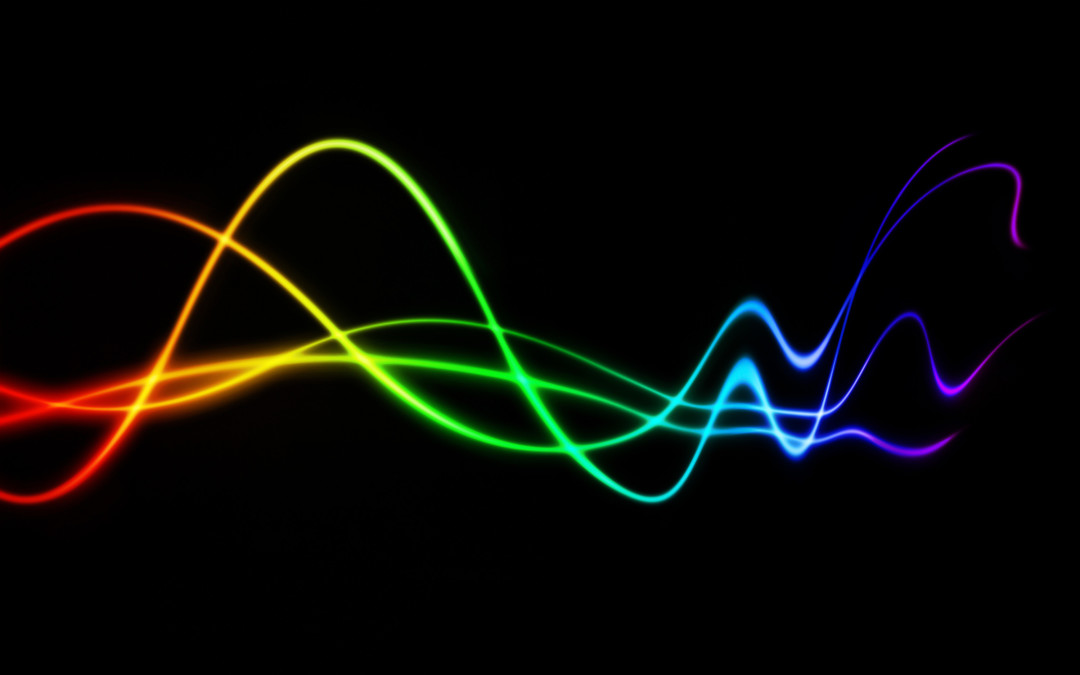 In addition to the ARO Hyperacusis Workshop speakers, Hyperacusis Research has been able to have in-depth discussions with many researchers over the past year. Our key interest in the near term is understanding the evidence behind central and peripheral (or cochlea) based models. While many researchers focus heavily on the evidence that has come from Tinnitus research which shows observable changes in the auditory cortex or other brain processing centers, some researchers also focus on the peripheral impacts that may lead to the central changes. From the evidence in these research works, various researchers have different opinions on what is cause and what is effect. The direct implications from these possible mechanisms is determining whether possible treatment paths should focus exclusively on the brain auditory pathways or other treatments that have a more direct cochlea impact. Read the summary of these conversations with researchers and their published works below. 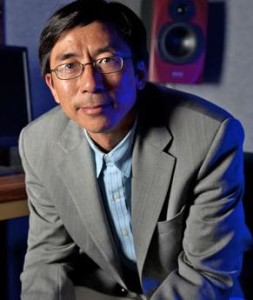 Hyperacusis Research was grateful to be able to visit ProfessorFan-Gang Zengat the Hearing and Speech Lab he directs at University of California Irvine. Professor Zeng gave Bryan Pollard, President of Hyperacusis Research, a tour of his laboratory which is equipped with state-of-the-art signal processing software and hardware that allows precise generation, control, and presentation of acoustic stimuli. Professor Zeng recently completed a very interesting work on tinnitus demonstrating the benefit of a new therapeutic tool, called the “Serenade Tinnitus Treatment System.” The device plays specially developed tones that can be customized to suppress a patient’s tinnitus. Of course our interest is in his hyperacusis work. An important paper he recently published is entitled “An active loudness model suggesting tinnitus as increased central noise and hyperacusis as increased nonlinear gain.” Professor Zeng uses a systems engineering approach to delineate the relationship between tinnitus and hyperacusis as a result of either hearing loss in the ear or an imbalanced state in the brain. Specifically examined is the input–output function, or loudness growth as a function of intensity in both normal and pathological conditions. Tinnitus reduces the output dynamic range by raising the floor, while hyperacusis reduces the input dynamic range by lowering the ceiling or sound tolerance level. We think works like this which help to differentiate hyperacusis from tinnitus are important to ensure the correct mechanisms of hyperacusis are understood. 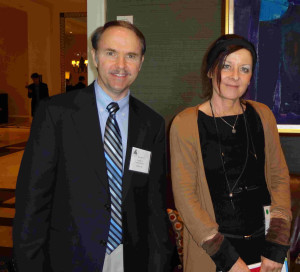 While at the ARO 2013 Midwinter Meeting, Bryan had lunch with Marlies Knipper who is a professor at the Hearing Research Centre at Eberhard Karls Universität Tübingen in Germany. Marlies’ most recent work was entitled “Noise-induced inner hair cell ribbon loss disturbs central arc mobilization: a novel molecular paradigm for understanding tinnitus.”  Here is an excerpt of the abstract: “Currently, tinnitus and hyperacusis are assumed to be caused by elevated responsiveness in subcortical circuits. We examined both the impact of different degrees of cochlear damage and the influence of stress priming on tinnitus induction. We used (1) a behavioral animal model for tinnitus designed to minimize stress, (2) ribbon synapses in inner hair cells (IHCs) as a measure for deafferentation, (3) the integrity of auditory brainstem responses (ABR) to detect differences in stimulus-evoked neuronal activity, (4) the expression of the activity-regulated cytoskeletal protein, Arc, to identify long-lasting changes in network activity within the basolateral amygdala (BLA), hippocampal CA1, and auditory cortex (AC), and (5) stress priming to investigate the influence of corticosteroid on trauma-induced brain responses. We observed that IHC ribbon loss (deafferentation) leads to tinnitus when ABR functions remain reduced and Arc is not mobilized in the hippocampal CA1 and AC. If, however, ABR waves are functionally restored and Arc is mobilized, tinnitus does not occur. Both central response patterns were found to be independent of a profound threshold loss and could be shifted by the corticosterone level at the time of trauma. We, therefore, discuss the findings in the context of a history of stress that can trigger either an adaptive or nonadaptive brain response following injury.” Hyperacusis Research is very interested in this work because it includes a technical analysis of both central and peripheral (cochlea based) mechanisms all the while keeping a full system level view of the entire auditory system. There is an indication that the amount of IHC deafferentation may be the initial differentiator between a subject getting tinnitus or hyperacusis. Additional variability in brain response mechanisms further contribute to the difference. 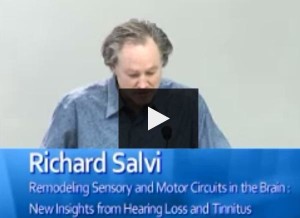 Bryan had a brief meeting with Rich Salvi from the Center for Hearing and Deafness at the University at Buffalo while at the ARO meeting. Professor Salvi gave a presentation at ARO on “Tinnitus and Hyperacusis: Involvement of Auditory and Nonauditory Structures. ” Here is an excerpt from his abstract: “The aberrant neural activity responsible for tinnitus and hyperacusis was believed to originate within the classical auditory pathway; however, more recent data suggest the potential involvement of nonauditory structures in the CNS. Here we review some of the neurophysiological changes seen in the cochlea and CNS when rats are treated with a dose of salicylate that induces tinnitus and hyperacusis-like behavior.” The results showed that “ High-dose salicylate (i.p.) caused a frequency dependent loss in DPOAE and reductions in CAP amplitude; losses were greatest at low and high frequencies and least in the mid-frequencies (10-20 kHz). Salicylate induced threshold shifts in the central auditory pathway that mirrored the cochlear losses, but did not significantly alter spontaneous activity.” His conclusion stated that “Salicylate exerts potent effects on the cochlea, central auditory pathway and non-auditory regions of the CNS. Salicylate-induced thresholds shifts originate in the cochlea whereas sound-evoked hyperactivity, a possible correlate of hyperacusis, likely originates at auditory and nonauditory sites in the CNS. The salicylate-induced tonotopic shifts seen in auditory cortex, which may underlie tinnitus, likely results from both peripheral and central changes.” Professor Salvi shared with Hyperacusis Research a video recording on the topic of “Remodeling Sensory and Motor Circuits in the Brain: New Insights from Hearing Loss and Tinnitus” which he gave few years ago at Microsoft Research. You can get a good detailed understanding of his concepts from this presentation.

Bryan also talked to Charles Liberman who is a Professor of Otology and Laryngology at Harvard Medical School and the Director of Eaton-Peabody Laboratories at the Massachusetts Eye and Ear Infirmary (MEEI). A recent work from Professor Liberman is entitled: “Adding Insult to Injury: Cochlear Nerve Degeneration after “Temporary” Noise-Induced Hearing Loss.” In an excerpt from the abstract, Professor Liberman explains that “Post exposure recovery of threshold sensitivity has been assumed to indicate reversal of damage to delicate mechano-sensory and neural structures of the inner ear and no persistent or delayed consequences for auditory function. Here, we show, using cochlear functional assays and confocal imaging of the inner ear in mouse, that acoustic overexposures causing moderate, but completely reversible, threshold elevation leave cochlear sensory cells intact, but cause acute loss of afferent nerve terminals and delayed degeneration of the cochlear nerve. Results suggest that noise-induced damage to the ear has progressive consequences that are considerably more widespread than are revealed by conventional threshold testing. This primary neurodegeneration should add to difficulties hearing in noisy environments, and could contribute to tinnitus, hyperacusis, and other perceptual anomalies commonly associated with inner ear damage.” This work is very interesting since it has been assumed with many hyperacusis patients had no cochlea based impacts because they did not show a threshold shift indicating loss of hearing at any of the standard audiometric frequencies tested. Additional testing may need to be developed and deployed for use with possible hyperacusis patients to adequately verify hearing loss.

After the ARO meeting, Bryan went to the Eaton-Peabody Laboratories at the Massachusetts Eye and Ear Infirmary to discuss hyperacusis mechanisms with Charles Liberman, Professor David Mountain from Boston University, Inge Knudson, and Jennifer Melcher who is an Associate Professor of Otology and Laryngology at Harvard Medical School and the Director of the MEEI Tinnitus Center.  Professor Melcher has published many studies using fMRI techniques to demonstrate differences in various auditory processing centers of the brain for tinnitus and hyperacusis. One paper entitled “Tinnitus, Diminished Sound-Level Tolerance, and Elevated Auditory Activity in Humans With Clinically Normal Hearing Sensitivity”, showed patients with mild hyperacusis had elevated activation in the auditory midbrain, thalamus, and primary auditory cortex compared with subjects with normal tolerance.  Our discussion centered around the symptoms patients experience including pain, aural fullness and ear fluttering.  This discussion led to the idea that research should not be centered on the traditional auditory mechanisms for getting sound to the brain but on how symptoms such as pain from noise could be generated. There was a strong interest in Myriam Westcott’s work on Acoustic Shock Injury (ASI).  In this work Myriam has found that up to 70% of ASI patients get ear pain from loud noises.  Myriam’s proposed mechanism for ASI is tonic tensor tympani syndrome (TTTS) where the tensor tympani muscle has excessive contractions.  Professor Melcher and the other researchers at MEEI felt this theory could be tested with hyperacusis patients. Another area of focus that was suggested is a complete hyperacusis survey across many clinics to get a more detailed understanding of the various symptoms hyperacusis patients experience.