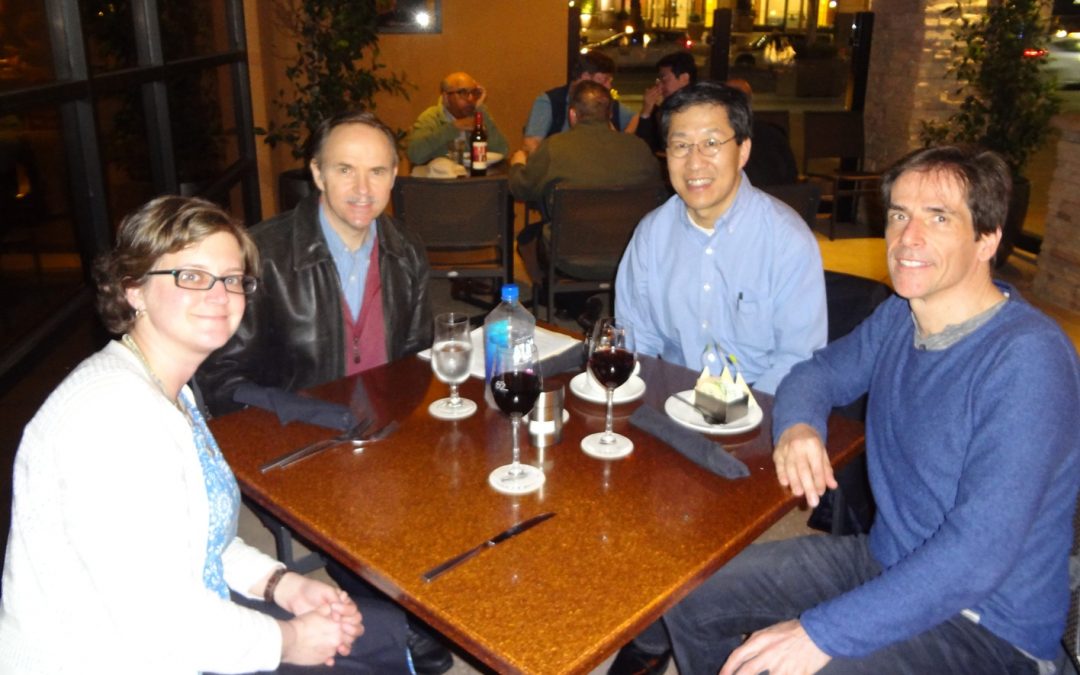 Hyperacusis Research was excited to participate in the Association for Research in Otolaryngology’s Midwinter Meeting for the fourth consecutive year. The conference, which took place in San Diego, CA, in February, 2016, brought together more than a thousand of the world’s top otolaryngology researchers. Bryan Pollard, President of Hyperacusis Research, met with many researchers and other partners, and introduced the symposium on “Auditory Nociception” (see separate post). 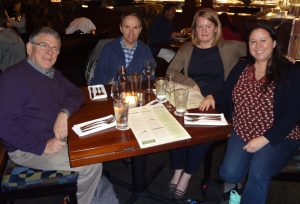 Iver Juster, MD, joined Bryan Pollard in a meeting with Ann Hickox from Purdue University and Michelle Valero from Harvard and Massachusetts Eye and Ear Infirmary.   Ann had worked with Charlie Liberman at Harvard in some of the earlier work that demonstrated neural degeneration can occur at sound decibel levels previously assumed to be safe.  At this year’s ARO, Ann chaired a workshop on tinnitus.   One idea discussed is the need to learn more about conditions where sound sensitivity is a challenge such as Autism.  There is an enormous amount of research on Autism compared to hyperacusis.  However, to date there is little known about any possible connections to hyperacusis induced from loud noise exposure.  There are indications that some hyperacusis sufferers have other sensitivity issues such as light sensitivity which is also common in Autism so there are opportunities for a deeper investigation.

Michelle’s recent work has focused on experiments to characterize the peripheral and central effects of noise induced hearing loss in nonhuman primates (monkeys).   While there is not currently a plan to use monkeys in studies of hyperacusis, there would be possible benefits in these animal models compared to those in mammals such as mice or rats.

There was also a brief discussion of possible serotonin level changes associated with the stress of hyperacusis and whether or not selective serotonin reuptake inhibitors (SSRIs) may have benefit. While there has never been a systematic study of drugs given to hyperacusis sufferers we hope we gain some insight into any possible benefits from our Sanford in-depth survey. 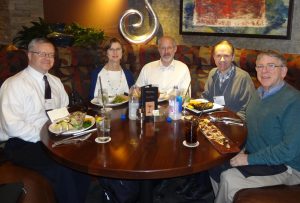 Bryan Pollard was joined by board member Michael Maholchic and his wife Betsy along with Iver Juster, MD, in meeting with Brian Earl, Director of EARLAB at the University of Cincinnati, Ohio.  Brian is developing diagnostic measures of auditory nerve survival in people with hearing impairment.

Given Brian’s focus on diagnostic tools we discussed the possible use of electrocochleography  and endocochlear potential measurements to explore hyperacusis mechanisms.  A key limitation of many diagnostic tools developed for hearing loss is that they are too loud for hyperacusis sufferers.  This is often because hyperacusis was not considered in the test development.  So work is needed to discover how to optimize some of these methods for low sound dB ranges.  Hyperacusis Research will continue to pursue this avenue with Brian Earl and others as diagnostic issues continue to challenge hyperacusis sufferers both because they are exposed to loud tests which create more issues and many of the tests today are not valuable for possible hyperacusis mechanisms. 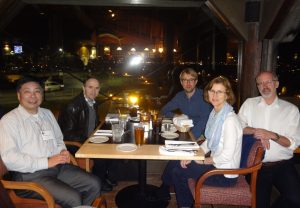 Guang-Di Chen from SUNY Buffalo and Roland Schaette from University College London joined Bryan Pollard and Michael and Betsy Maholchic to discuss their research work. Roland Schaette has been a key driver of modeling the auditory system. Roland presented a poster at ARO titled “On the Relation Between Objective Measures and Hidden Hearing Loss.”

In this poster, Roland shows important differences in the degeneration of hair cells and auditory nerve fibers (ANFs) in the development of sensorineural hearing loss (SNHL). The standard view of hearing loss assumes that hair cells and ANFs degenerate proportionally, and the latter is indistinguishable with respect to the type of fibers.  Animal data have demonstrated that even moderate levels of noise exposure can lead to auditory neuropathy directly, selectively damaging high-threshold, low-spontaneous rate (LSR) nerve fibers, before any damage to hair cells is evident.

Preliminary analyses indicate that the ratio of ABR waves V and I (V/I) obtained at high intensities increases for subjects in cases where HHL is suspected. This is in line with a compensating gain at the level of the auditory brainstem, perhaps at the level of the cochlear nucleus. The ABR V/I ratio correlated significantly with speech-in-noise tests, VCV test and QuickSIN. Hearing difficulty scores measured using APHAB and reported noise exposure also correlated significantly.

The amplitude of acoustic startle reflex (ASR) and pre-pulse inhibition of the ASR are now widely used as behavioral readouts of tinnitus and hyperacusis. The ASR is triggered by moderate to high intensity sounds and adapts with a short inter-stimulus interval. It is mediated by a simple neural circuit in the brain composed of the cochlear nucleus, caudal pontine reticular nucleus (PnC) and spinal motoneurons. The ASR amplitude is greatly enhanced by high-doses of sodium salicylate.  A functional magnetic resonance imaging study revealed significant hyperactivity in the pontine reticular nucleus during salicylate-induced tinnitus and hyperacusis. These results suggest that high-dose sodium salicylate might enhance ASR amplitudes by altering sound-evoked neural activity in the PnC. To test this hypothesis, Guan-Di’s team made electrophysiological recordings from the PnC before and after SS treatment.

The results demonstrated that sodium salicylate reduces the neural output of the cochlea, but paradoxically enhanced sound-evoked PnC responses at high stimulation levels, consistent with the increase in ASR amplitude after sodium salicylate  treatment. The sodium salicylate induced enhancement of PnC responses could be due to a reduction of GABA-mediated inhibition in the PnC or alternatively, indirect effects of sodium salicylate on the amygdale which in turn enhances activity in the PnC.  Hyperacusis Research appreciates the continued in-depth research efforts from the SUNY Buffalo team to find a cure for hyperacusis. 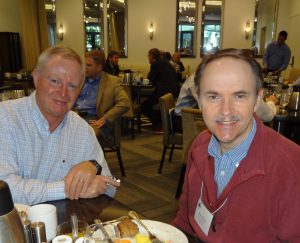 In this work Gary investigated the nature of what happens in excessively loud noise environments.  To understand his work, it is important to know the nature of peripherin.  Peripherin is a type III intermediate filament protein that is expressed by the type II spiral ganglion neurons (SGN) and has a role in establishing the sensory innervation of the outer hair cells. The distributed type II SGN innervation of the outer hair cells is absent in the genetically modified peripherin knockout  mouse and this results in loss of contralateral and ipsilateral suppression mediated by the medial olivocochlear (MOC) reflex. Thus the type II SGN afferent innervation drives the MOC reflex and the peripherin knockout mouse  provides a good model for studying the role of the MOC reflex in otoacoustic protection.

Gary exposed both normal mice and peripherin knockout mice to 93 dB – 108 dB SPL sounds for 1 hour. Baseline ABR hearing functions were analyzed before and  immediately afterwards, and then two weeks later.  Both the normal and genetically modified mice exhibited significant elevation in ABR thresholds immediately after noise, at all tested sound levels. There was no significant difference based on genotype. Two weeks later, thresholds in the normal mice had returned to pre-noise levels, however the genetically modified mice exhibited a sustained elevation in thresholds at frequencies above 16 kHz. These data indicate that the  peripherin knockout mice had cochlear damage.

Gary concludes that these findings indicate that type II SGN afferent drive of the MOC reflex confers protection from acoustic overstimulation. Hence efferent feedback to the cochlear amplifier extends the safe upper limit of hearing.  Of course, our interest lies in determining if some type of protective effect like the MOC reflex has been altered in hyperacusis patients.
Near the close of ARO, Bryan Pollard met with Amanda Lauer from Johns Hopkins, Jinsheng Zhang from Wayne State University in Detroit , and  Lukas Rüttiger from the University of Tübingen in Germany (pictured at top of this posting).

Near the close of ARO, Bryan Pollard met with Amanda Lauer from Johns Hopkins, Jinsheng Zhang from Wayne State University in Detroit , and  Lukas Rüttiger from the University of Tübingen in Germany (pictured at top of this posting).

Since joining the board of the American Tinnitus Association (ATA) Bryan has been able to collaborate with Jinsheng Zhang who serves as the Chief of the Scientific Advisory Committee for ATA.  Jinsheng has been a strong supporter of ATA’s new mission which includes a focus on hyperacusis.   Jinsheng and Professor Arnaud Norena successfully organized a special issue on tinnitus, with 21 contributions from experts around the world.  This issue appears in the journal Frontiers in Neurology, Otology Section-2015.  His published work has also included some investigation of hyperacusis. 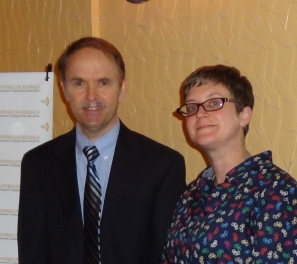 An important outcome of this meeting is that Amanda Lauer agreed to be a scientific advisor for Hyperacusis Research.  We are excited to have another export to help direct the research efforts for finding a cure for hyperacusis.

A key work presented at ARO Amanda Lauer’s team was titled: “Imbalance in Excitation and Inhibition in Ventral Cochlear Nucleus (VCN) of Mice Exposed to Damaging Noise”  In this work, Amanda’s team investigated the loss of inhibition and corresponding increase in neural activity in the inferior colliculus and dorsal cochlear nucleus after noise exposure, which are hypothesized to be related to tinnitus and hyperacusis. There is also physiological evidence of hyperactivity in the ventral cochlear nucleus (VCN). In patients with tinnitus and hyperacusis, waves III and IV of the auditory brainstem response (ABR) tend to be larger than in normal-hearing individuals, suggesting there may be neural hyperactivity in bushy cell-driven pathways. Anatomical studies of a very small region of posterior VCN have noted degeneration of both excitatory and inhibitory axons and terminals in the VCN following unilateral noise exposure. Amanda investigated the effects of noise exposure on the imbalance of excitation and inhibition in the VCN of CBA/CaJ mice exposed to moderately loud noise. Amanda’s team found that the wave III/I and wave IV/I ratios of ABR amplitudes were larger in subjects that had been exposed to damaging broadband noise one month prior compared with unexposed controls.

These larger amplitudes suggest either that excitation in bushy cell driven pathways is increased, that inhibition is decreased, or both. When they quantified the presence of glutamate decarboxylase (GAD65), a protein localized to GABAergic synaptic terminals, they found a substantial and widespread loss of GAD65 in the VCNs of noise-exposed subjects relative to unexposed individuals, indicating a massive loss of inhibition in VCN. In contrast, excitatory vesicular glutamate transporter 1 (VGLUT1)-positive puncta, representing auditory nerve terminals, were less affected by noise exposure. Amanda concluded that the imbalance of excitation and inhibition in the VCN is largely attributable to loss of inhibition, but changes in excitatory synapses at the ultrastructural level cannot be ruled out.